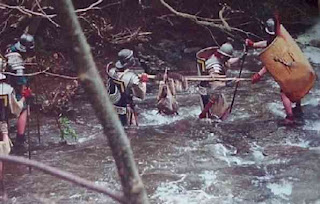 US Military Recruiting Foreigners
The article says the military "considers" recruiting foreigners in exchange for US citizenship. What do they mean, "considers?" They're already doing it. Caskets have been sent back to Fiji, Guam, Mexico, and the Phillipines from Iraq. The Roman Empire recruited from its provinces, but their soldiers not only got citizenship after service, they got draft animals and a farm. Well, I suppose this Empire's recruits will get Social Security <snortle>.
Posted by MarcLord at 1:33 PM