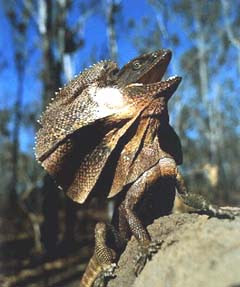 "My Son Is An Honest Man," Pt. II
I have respect for a good liar. A good liar, like a good thief, must have great respect for the truth in order to not get caught, keeping all the threads in the web straight and orderly. Bill Clinton, for example, was a liar par excellence. Almost as good as his wife Hillary in terms of pure technique, and far better on delivery. The Bush Family, on the other hand, lives in the Spin Zone, and lost all connection to the truth, and thus to reality, long, long ago. Spin relies on assertion, and like a good thug it must repeat itself like the heel of Orwell's proverbial boot kicking humanity in the face over and over forever. Spin responds to nothing; it is not tethered to the truth by lies. Spin is an assassin sent on a suicide mission; freed from the restraints of reason, like reptilian tissue it functions only on the most base impulses, like threat avoidance, threat confrontation, the pleasure of eating, or pain. The Bush Family is a wounded reptile right now, its pains not hard to discern in the recent writhings of its biggest dragon:

The former US president George Bush Snr was forced into a defence of his son, the current President, during a visit to United Arab Emirates yesterday, when George Bush Jnr's Middle East policies were derided by a hostile audience.

"My son is an honest man," Mr Bush told Gulf Arabs at a leadership conference in Abu Dhabi, after an audience member said Mr Bush Jnr and his policies were not respected. "He is working hard for peace. It takes a lot of guts to get up and tell a father about his son in those terms when I just told you the thing that matters in my heart is my family." Mr Bush, President from 1989 to 1993, added: "How come everybody wants to come to the United States if the United States is so bad?"

He said he had faced tougher audiences but that attacks on his sons hurt more than those on him.

The oil-rich Persian Gulf used to be safe territory for Mr Bush Snr, an oil man who brought Arab leaders together in a coalition that drove Iraqi troops out of Kuwait in 1991. But his son's invasion of Iraq and support for Israel are unpopular in the UAE. "We do not respect your son. We do not respect what he's doing all over the world," a female audience member told Mr Bush after his folksy keynote speech, in which he said how proud he was of his sons. Mr Bush appeared stunned as the audience of young business leaders whooped and whistled in approval.

"This son is not going to back away," Mr Bush said, his voice quivering.

So we see the genetic and behavioral well-springs of the delusional narcissim running through the entire bugsy Bush clan. One part of me has empathy for a man who sees himself as having devoted his life and his family's to public service. Then I remember that his grandfather armed the Brown-shirts with Smith and Wesson revolvers in 1923. Then I remember that his father was the investment banker for Hitler until at least 1943. Then I remember that he called the Dallas PD three hours before JFK got shot. How much else do you need to know? So the other part of me, the reasoning part, sees Papa Lizard lope back to the swamp he's been feeding at since he was spawned, detect a threatening smell in the air when he flicks out his tongue, hissing and growling in reflex. The Bush Family is a failed dynasty--too bad it's going to take many more spear-thrusts to lay these worms to rest. But it must be done. Too bad lizards thrash about so when they're wounded, and too bad they're still leading our country.