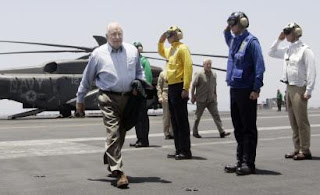 Why We (Really) Fight: Mythbusting, Pt. V Redux
(Update: I'm re-posting this today because the announcement just went out that the respective ambassadors of the United States and Iran will be following up on their recent meeting again, this time officially, over the next few weeks to discuss how Iran can help in the stabilization of Iraq. The old post below discusses the basics of what drives American and Western foreign policy. While the upcoming talks are a back-down humiliation for the Bush Administration, they're a big win for BushCo because they're not just "talks." They're the start of a long negotiation which will likely include many components like money, markets, and opportunities. Dick Cheney personally did business with Iran when he was CEO at Halliburton, even though it was expressly banned by law. Profits are more important than laws.

US policy makers do not care if other governments or their people are sacrificing children to molten idols of Moloch and worship in Temples to Baal if there's relatively risk-free bucks to be made. Money will be put on the table with Iran early, and it will involve uranium enrichment and who helps them build nuclear power plants. One big US objective will be to kick the Russians out of their contracts to build the plant at Bushehr. Similar to the deal BushCo struck with India. If that's a trade Iran is willing to make, and they're willing to pay in oil or cash along with making some political concessions, they'll get a deal. I strongly suspect that Mssr. Cheney is already working this angle hard, and that it's behind his recent presence in the Mid-East. And yes, I suspect it even though he just stood on the deck of an aircraft carrier and reminded the mullahs he can bomb them whenever he chooses. If we're dealing with "totalitarians," Cheney is behind it, and there's going to be money involved.)

You've almost undoubtedly heard the logic from a friend or a relative: "Saddam was a bad man, and we had to go take him out." Relatives, well....I figure I'm stuck with them, and if they've put up with me for so long, I can pretty well put up with them. It saddens me more when I hear this kind of thing from a friend, because it means they're spouting ignorance, and ignorance in friends tends to concern me. Sadly, it means I'll probably have to speak carefully and be patient while reality sneaks up behind them and whaps them like a thug with a blackjack just behind their ear. You should be able to save a friend from such a fate.

On rare occasion I've blurted out, "You actually believe our government cares whether or not Saddam Hussein was a bad man? Cool! You must have a trust fund you didn't tell me about. Dinner's on you tonight, thanks, buddy!" Amongst friends, foes, strangers or no, indulging in Non-Delusional Honesty Incidents (or as we call them here at the ABH offices, N-DHI's) regarding our misadventures in the Mid-East have helped keep my social calendar to a manageable level of engagment, and silence, changes of topic, various looks of confusion, indigestion, disappointment, steely rejection, and seething rage can ensue. I've lost friends, too. But all those things are delightful experiences in comparison to living under a Cone of Complete Bullshit (or COC-B).

Here's the AgitPop Foreign Policy Guide, quick and dirty: "Furren" countries are judged not on any moral basis, not ever, despite the pundit classes' well-paid protestations to the contrary. They're judged solely on their willingness and ability to mold themselves in America's image and provide enough stability for corporations to make money. So here's a handy barometer I use:

If there's a McDonald's in a country, it is either with The Program, or they're trying hard to get with it. No McDonald's? No KFCs? No Baskin Robbins, not even a measly Dunkin' Donuts? They're Bad Guys, and you're in Injun country. America's terminology is governed by the McDonald's distinction, because it's a useful measure of whether or not the multinational corporations who run the US government can safely make money in a particular country. If there are a few McDonald's fast food restaurants in Absurdistan, the proper word to characterize its ruler is "authoritarian," or "friendly." If there is no McDonald's, or only one, that country is still run by a "totalitarian regime." August Pinochet: authoritian. Saddam Hussein: totalitarian. One you can make money off of, no problemo, the other is really tricky. See? Rock-solid simple analysis. The best you can do to fleece totalitarians is sell them weapons, a risky and often clandestine exercise.

Afghanistan was invaded not because it had anything to do with 9/11, but because the Taliban had previously negotiated over proposed pipelines, to be junctioned in Kandahar, in bad faith. It also became apparent the Golden Arches were never going to spread their smiling shadows over its craggy landscape. Same basic thing with Saddam Hussein. Refusing the Blessings of the Big Mac is proof positive that a leader is refusing reason, is dangerously totalitarian, and is impossible for our franchises to do business with. Thus the need for "regime change." And what about Iran? Ah, Iran is far, far worse:

Iran has invested its oil wealth in universal education, healthcare, infrastructure bringing clean water and electricity to more than 98 percent of its people, and economic progress. Military spending is a paltry $91 per capita compared to more than $1,500 per capita in the United States and Israel. The social and economic achievements of the revolutionary regime in Iran in the past 25 years look quite progressive in reducing poverty and social inequalities, and as the society liberalises toward a more secular democratic regime, even better progress can be expected in the future. Compared to rising inequality in the United States and Israel, ranked numbers one and two for social inequality among developed nations, the Iranians look pretty damn good.

That, of course, is the problem. If Iran, rather like Venezuela, becomes a regional leader and examplar of social democracy, it becomes a threat to the corporatist and militarist elites that dominate the political classes of Washington and Tel Aviv and exploit the mineral and oil wealth of underdeveloped nations.

Education and successful economic development are a bigger threat than any weaponry if you are a corporatist kleptocrat. And that is why Iran must be bombed, like Iraq and like Lebanon. It has succeeded, and must be bombed back to failure.

The level of distribution, ingredients, preparation, quality, uniformity, and broadcast control required to sell a Big Mac in Mumbai is enormous. By nature, it has to be systemic. This is so axiomatic it has attained the status of an orthodoxy we don't even think about. To us in the West, it's invisible. Whereas, for many Muslims in other countries, they know a McDonald's system will not respect the core dictates of their religion, nor their lives, having witnessed the agents of that system at work in Iraq. Prior to Iraq, McDonald's could buy them off gradually, but now that game is done. Bombing the Iranians won't help bring anyone into line, either. The whole Muslim world has seen with its own eyes that 99% of the Iraq War has been about taking its resources, and they're not about to buy into the American Dream. There won't be a lot of new takers for what we're selling, either, because now they're all "totalitarians."

(So I'm not predicting McDonald's and Starbucks are going to start popping up in Tehran anytime soon. But talking with your enemies is better than the other alternatives. Thanks for Uncle $cam over at American Samizdat for permission to reprint his catch of a Dkos diary.)

yes, it's a thing to behold. Like fixing a Swiss watch with a hand grenade.

How are you doing, Bruce?

Not too bad, thanks for asking.

Looking forward to 12 straight days of family time at the end of the year.