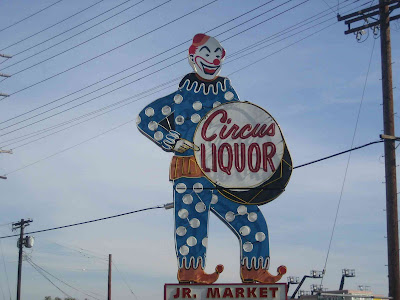 Prozac The Clown & William Bennett Do Las Vegas
[Prat-falling off the Segway he was slumped onto, Prozac makes his entrance to the Family Research Council Conference's day care facility. A crowd of impeccably-scrubbed kids lose their composure, whooping with schadenfreude-steeped joy .]

Hiya, boys and girls! I'm here because Bill the Bennett, one of the greatest clowns in the whole white world, my esteemed colleague and drinking bu...very close friend, is upstairs talking to your parents right now. So he sent Prozac! Prozac'll tell ya right now, kiddies, he can't hold a candle to the Bennett when it comes to dosing out a case of the clown crazies. But what he can do is...this! [Prozac turns, then runs full-speed into the wall, nearly knocking himself unconscious, reeling and collapsing on the floor. The children squeal with ear-splitting hysterical ecstasy.]

Toot-toot! Sheesh, those walls sure can sneak up on you! And that's just what Bill the Bennett would tell you if he were here. In fact, it's what he's saying to your mommies and daddies in the Big Room upstairs right now:

Let Prozac explain what that means. See, Bill the Bennett is a very smart clown, and he's also very brave. With his own two eyes, Prozac has seen Bill stay up all night at Caesar's Palace playing high-stakes Black Jack. What he means is, the wall that snuck up and hurt Prozac is just like the Liberal Media. That's right. Liberals are losing a war against Bad People, who want to come here and hurt your mommies and daddies. Bad People want to come here and hurt you, too. How bad are they? Well, for one thing, they would burn down all the McDonald's and Burger Kings everywhere. So you could never have another milkshake ever again! That's how bad! [Prozac makes his sad face, the children get totally quiet and little creased frowns of worry build upon their brows.]

Hey, c'mon you great little Americans, don't you worry. Not even for a minute. We're going to kick Bad People Booty. Toot-toot! And here's a little hint from your buddy Prozac, to make you look smart to your parents. So smart they'll buy you a milkshake and all the fries you want. So: when you're going home with them in your SUV, tell them that the Nazis only surrendered because their Liberal Media confused everybody with defeatism. And Japan's "Left Wing" [Prozac flaps left arm, holds nose] got "befuddled" by Hiroshima and Nagasaki.

What's defeatism? Very good question from the little girl in the yellow dress. Well, it's spelled d-e-a-f...whatever, defeatism means you love to lose. And only sick people, like Liberals, do that! And befuddled means, ah, messed up. Tell your parents the next time you see someone from the Liberal Media, you're going to kick them in the bee-hind, and that you need to eat a Big Mac right away, so you can grow up big and strong and dish out lots of Collateral Damage.

Ok, you got it? Liberal Media! Defeatism! Milk Shake and Big Mac. Aww, you're such good boys and girls, and Prozac loves you all. But he knows Bill the Bennett must be feeling a mite parched right about now, so he's gotta go help out before it's an emergency. [Prozac precariously mounts his Segway.] Now, do you remember the Prozac Motto? That's right: Take Your Ritalin, Be a Good Citizen!
Posted by MarcLord at 10:45 AM

Very nice. However, I would change "the Nazis only surrendered" reference to Wilhelmine Germany. You see, during WWI they were "stabbed in the back." I won't say by whom, but they, uh, control the media. The more things change....

What's this Wilhelmine stuff? You can't possibly mean the Germans were wussies. But right...they were stabbed in the back, just like the Greatest Field Marshal of All Time is being stabbed in the back now. Got it! That group doesn't control the media here. Only 90% of it. We better start writing up the Talking Points so everyone will understand what's going down.

My lawd, Mr. Lord, two in a row. The madness stalking the land has driven you straight into poetryism.

Not for long, Jesus. The trick's to get mad, not be mad.