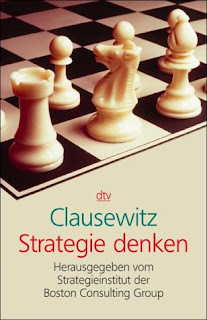 The Return Of Containment & Hope
"The first, the supreme, the most far-reaching act of judgment that the statesman and commander must make is to establish...the kind of war on which they are embarking; neither mistaking it for, nor trying to turn it into, something that is alien to its nature."

(Update: I posted this back in May, and am re-posting it for its topicality to positive developments on the Iranian front, and to positive statements by Democratic candidates with regards to foreign policy, Obama and even Hillary among them. Will append Hillary's foreign policy platform later.)

Clausewitz translation: fight stupid wars, and pretty soon you'll leave broken monuments. Von Clausewitz would've chortled schnapps out of his nose at the Bush Doctrine. Attacking and occupying Iraq grossly conflated a minor but thorny enemy into an empire-ending emetic. It was a full-court embarkation onto a fool's parade of twisted alien natures and wars which can't be won. It's time to cut the losses and reach back to strategies which proved successful.

George F. Kennan was a time-and-motion foreign policy genius (the anti-Bismarck), and he was the promulgator of "Containment." In context, Containment was a long-term, non-violent way of defeating an inimical, hostile form of government, a way of lowering confrontational temperatures down into a non-military zone. Kennan would know about that. He was SecDef under Truman from 1947-48, a time when many in the U.S., England, and Germany, including George S. Patton and a chorus of ex-Nazis believed there was no good alternative but to invade and defeat Stalinist Russia. The lower the temperature, the more it favored us.

Kennan convinced Truman and the planners around him, with a series of well-reasoned articles, to buy enough time for flawed, inferior, murderous, centrally planned communist systems to fall. He knew we didn't need to attack them directly because they would consume and probably reform themselves. Kennan was probably the biggest anti-communist of all time, and I became his disciple in the early 80's because his doctrine of strong-point containment had the courage to express and exercise a simple confidence in democracy. He believed we would win out, and thus didn't need to attack Korea, Cuba, Vietnam, El Salvador, Grenada, Haiti, or other places. Kennan believed it would be better to out-invest Russia and China than to out-kill them. He made sense to me then, and he makes sense to me now. None of those wars needed to happen to defeat communism, and he encouraged not a single one of them. All the crucial battles between democracy and communism were about making people healthier and happier than the other guy did. Sometimes that was hard for both sides to understand.

Ian Shapiro, a Yale Professor and biographer of George F. Kennan, was on the local NPR show the other morning. He was talking lots of sense that morning, so I called in and slid past the producer with an inane, innocent question, something like "I'd like to invite Dr. Shapiro to speculate about when Containment will make a comeback." But when the producer patched me in, I asked Shapiro on the air with extravagant politeness: "How long until this goddamned %@%^*-t ends?"

Sweet! What do you think he meant, exactly?

My sense is that he was referring to the Bush Administration passing by the wayside, and a new President dealing with Iran/Syria/Pakistan/China and Russia more pragmatically.

Nice quote, Jon. Everything I know about war tells me Iran-Russia-China won first, and BushCo is a project of desperation.

Gives me chills...and hope. Thanks Marc.

God bless you and yours, my best Hope. Glad you made it through the tornado, too. ;-)

In Europe, Poland wants again to be a "martyr" countrie. Still the jews...like if the Israel State isn´t sufficient for "something" very special.
And of course Russia: if China exhibes a progress and developpement idea, Russia has no idea. Or is "another" idea.
Guillem.

You must mean Poland agreeing to host the missiles has a downside. Agreed, but they joined NATO. It comes with a price.