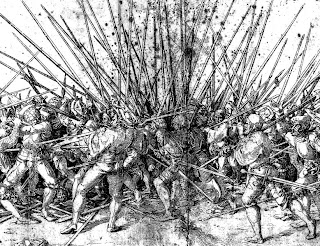 Of Mercenaries And Black Waters
A good rule of thumb in military history is to bet against a belligerent which hires mercenaries. For bad ideas, it generally ranks up there with press-ganging peasants into service and sending them into battle armored with straw, carrying scythes and pruning hooks. Commingling the former with the latter is more than a rule of thumb, the results as predictable as throwing a match into a keg of gunpowder which is lying under an outhouse near a propeller. Unless, of course, one adversary is determined to outbid the other in terms of simple stupidity. There is an undeniable element of luck in battle, as those who lived through them attest. The famous Hans Holbein engraving, attached above, conveys the image of confusion without the blood.

There are exceptions to these rules, of course. In the article below, for example, economic warlock Paul Krugman needlessly takes Machiavelli far out of context, even falsely construes his meaning, in order to denigrate the US security services firm, and the regrettable haven of our bad fortunes, Blackwater USA.

In truth, Machiavelli did not say mercenaries are worthless. He said they're unreliable, and also wrote a great deal about their relative utility and employment, praising in particular the dreaded Swiss pikemen who were renowned for their competence and ruthlessness. In the Hundred Years' War, if you didn't have your Swiss piker contingent, or a larger one than your opponent, the starting odds were considered as stacked against you. They were impervious to cavalry charge and pretty much everything else but another heavily armed pike box, such as another formation of Swiss mercenaries. They wouldn't fight each other, however. Their supremacy in Europe only began to dim with the increasing effectiveness of firearms circa 1500, but they remained on the battlefields there until the early 1800s. Even today, their last contingent guards the Vatican.

More commonly, mercenaries, the Swiss included, have always been known for their abominable behavior off the battlefield. They are known for freebooting, looting, murder, pillage, rape, protection rackets, and the indiscriminate application of senseless violence. Nearly four hundred years after the fact, bad memories of mercenaries remain compressed into an expression of disgust in German: Schwedentrunk, or "Swede's mead." In the Thirty Years' War, in which 20%-40% of Germany's entire population died, Swedish troops swarmed down throughout the land to ostensibly persecute Catholics. Their rear, or "black" guards devised an expedient to aid in finding hidden food, treasure, and women: they would take manure and liquify it with urine, fill a funnel with it, and force a servant or farmer's jaw open. The practice was recorded in the baroque satirical memoir of that war, Der abenteuerliche Simplicissimus (English title: Simplicissimus):

They lay the bound servant on the ground, stuck a wooden wedge into his mouth, and poured into his belly a bucket full of foul manure water, which they called a Swedish Drink.

The quibble with Krugman is past history. Blackwater USA, founded by evangelical crusader Erik Prince in the here and now, is the private muscle of the Bush Administration. Prince has donated $168,000 to the Republican National Committee. Iraq's population has been preyed upon by its lawless mercenaries and 20% of its population is already dead, maimed, tortured, robbed, raped or displaced. Blackwater had a lot of help with that, but they did play a prominently annointed part. To think that Blackwater's mercenary role departs from the norms of history is utterly naive, which most of my fellow citizens still choose to be, as is thinking that the American Legacy retains its former status. Which we all prefer to do. Here's the article (via Cat in the Bag):

Sometimes it seems that the only way to make sense of the Bush administration is to imagine that it’s a vast experiment concocted by mad political scientists who want to see what happens if a nation systematically ignores everything we’ve learned over the past few centuries about how to make a modern government work.

Thus, the administration has abandoned the principle of a professional, nonpolitical civil service, stuffing agencies from FEMA to the Justice Department with unqualified cronies. Tax farming — giving individuals the right to collect taxes, in return for a share of the take — went out with the French Revolution; now the tax farmers are back.

And so are mercenaries, whom Machiavelli described as “useless and dangerous” more than four centuries ago.

As far as I can tell, America has never fought a war in which mercenaries made up a large part of the armed force. But in Iraq, they are so central to the effort that, as Peter W. Singer of the Brookings Institution points out in a new report, “the private military industry has suffered more losses in Iraq than the rest of the coalition of allied nations combined.”

And, yes, the so-called private security contractors are mercenaries. They’re heavily armed. They carry out military missions, but they’re private employees who don’t answer to military discipline. On the other hand, they don’t seem to be accountable to Iraqi or U.S. law, either. And they behave accordingly.

We may never know what really happened in a crowded Baghdad square two weeks ago. Employees of Blackwater USA claim that they were attacked by gunmen. Iraqi police and witnesses say that the contractors began firing randomly at a car that didn’t get out of their way.

Yeah. We know pretty well what happened. And what else is happening. Krugman goes on in language suitable for polite society at the NY Times.
Posted by MarcLord at 4:48 PM

and you inspired me to give you and a few others special thanks! :)

Hey, Marc, how about the entire male population of America become mercenaries, wear six-guns, bring back the Wild West, the times when every problem was solved with a shootout, like at High Noon.

America, to some extent, seems to be caught in a time warp, one that loves violence and killing. If you don't want to join the army, join a private army, see the world, earn big bucks, kill a few hundred people for kicks, men, women, kids, doesn't matter.

Americans seem to be living a brutal dream created by Hollywood.

Well bless your heart! I've been away from the blog for awhile but am grateful, and very appreciative of your whole blog-roll post.

Hello! A-ha! This time I've got you: America, like Australia, really is a brutal dream. Hollywood just comes along for the ride, and is situated on the far side of the dream, where it became reality.