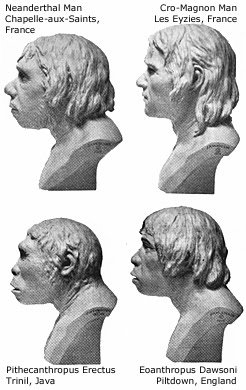 Neanderthals, Ethnicity, and Social Darwinism
When I was 5 or so, my Uncle Quig, a rough and jovial, self-educated free-thinker, remarked in passing: "You know, Marcky, you'll hear a lot of people claim the Neanderthals are extinct. But they're not. Just look around you!"

At this remove, it's hard to say whether my good uncle, whom I loved for spoiling me and feared for the tools of mobility and violence he versed me in, was being literal, figurative, or both. Regardless, I have ever since pondered what may have happened to that race, whether they survive at all in our genome, or how they may have influenced humanity's development. Neanderthals are commonly portrayed in speculative science as an inferior design, a deservedly failed race. In truth, it's not at all certain either was the case, and the procedural developments leading to humans as presently composed is, I suspect, much more variegated than reigning orthodoxies suggest.

To the Neanderthals, we must have looked like out-grown children, lacking in menacing brow ridges, our eyes so exposed and unarmored. They may have noted how our cranial sutures never even close completely. On first meetings, they surely would've heard how our throats could make words like bird-song, or even the cooing of babes. Instincts in their equal or greater brain capacities must have been triggered, and they might have even decided on the spot we were comparatively fragile creatures, in need of nurturing.

And nurture the Neanderthals certainly did. Evidence indicates they far outclassed our forebears in that regard. One in five of their found remains come from individuals over 50 years old, data which dumbfounds scientists who study primitive humans. Among sapien remains of the same vintage, attaining the 50 year benchmark of longevity was a comparatively rare achievement. Yet more Neanderthal remains have been found, individuals who reached past 70 or 80, their bones so afflicted with advanced arthritis, for practical purposes they were immobile. Well cared for, nonetheless, apparently with some good sort of Social Security system. Neanderthal graves were covered with flowers. This and a host of other clues point to that race being, in the main, gentle creatures with elaborate rituals and mild manners, not lacking in intelligence. They were recently re-classified as a sub-set of Homo sapiens, Homo sapiens neanderthalensis.

Facts lurk behind legends. The conceptualized fantasies of dwarves and trolls may echo disdain proto-humans felt for their shorter, squatter, coarse-featured cousins. Yet the two species overlapped for at least 60,000 years. There are clues to what happened. Near the latter part of that period, when Neanderthal artifacts disappear, Cro-Magnons were engaging in hazing rituals. And there is very old evidence of human torture.

For example, rock carvings over 10,000 years old depict hog-tied men in a Sicilian cave. Hog-tying is a simple but extremely effective means of torture, one which allows torturers to kill their victims by the action of leg muscle tension against rope tied around the throat. The victim's innate reflexes ensure death by strangulation, and the torturers can revive them as many times as desired. If you've ever died by strangulation, you know it's an extremely uncomfortable, viscerally terrifying experience, and the ancients from which we come had already perfected this agonizing death by 500 generations ago. Genocide as pastime is voluminously illustrated in our histories, the smallest of ethnic differences have conflated shocking levels of ferocity, and these tendencies would seem to be rather deeply embedded in our DNA. Our evolutionary decisions may have to be made in the space of about 30 seconds, about the length of warning time a select few of our race would receive in the event of an encompassing nuclear war.

At a time when US soldiers are being trained to "bait" Iraqi boys by leaving coils of wire or various objects on the ground so that, when examined and picked up the boys can be shot dead in good conscience, the question of what happened to the Neanderthals seems pretty topical. If we're so willing to hunt our fellows, equal to us in all ways, in naked imitations of The Most Dangerous Game, one wonders what hells were visited on species which represented the Other. Were Neanderthals hunted to extinction for sport? Were they displaced, or replaced? Or were they folded into our bodies and cortices?

The fragments jutting out from the hominid past are so complex that a close replica of humanity's future may already have once lived. It seems likely all the scenarios above occurred in parallel. Gene flow across regions is persistent across human development, so if it was possible for humans to mate and breed with Neanderthals, they did so. My long-held hunch would now be called replacement theory: we interbred routinely, and for a long time. But on average, Neanderthal mothers liked having hybrid human offspring more than (we'll call them Cro-Magnon) human mothers liked having hybrid Neanderthals. While their offspring might have displayed the typical hybrid's hyper-vitality, there may have been some degree of "mulishness" manifested by lower fertility. Even in the absence of active genocide or infertility, social preferences connected with Neanderthal nurturing instincts being triggered by those smooth human baby-faces, would lead to being out-bred and replaced.

Again, it's just a hunch, and scientists are avidly following DNA trails in an effort to settle the cross-breeding arguments. So my speculations could be completely wrong. The general subject, however, brings us right 'round to the prime motive fear of the Clash of Civilizations crowd. Fear of being out-bred. The Neanderthal may have been a more formidable fighter than the humans, and skeletal structures alone support that case. Seeing their numbers dwindle and suffer persecution, Neanderthals may have sometimes retaliated with hostilities, perhaps even burning themselves out in a last gasp in the Europe of 30-40,000 years ago. Now as then, aggression comes in many forms, and the use of passive aggression in modern regional-cultural settings should yield far better survival profiles than confrontational models currently being applied to such futile effect. This would also allow for the preservation and promotion of ethnicities, and excellent means of hedging bets for species survival. We'll see if I'm right about that Neanderthal DNA, and if we figure out how to make it.
Posted by MarcLord at 2:14 AM

Sorry marc, this is unrelated, but I am reading in the Iranian press that Iran's finance minister was in Washington today, meeting in the IMF. Wonder if your wall street talents can second this?

The message is it's not so bad, the price of oil is below its all-time high because the dollar is comparatively weak. Don't know who attended and it's well past EOD Easter, but will check.

Interesting. Why would the N's had lived to 70 and 80? Modern drugs are getting us there today and they had none of those to help soothe pains and discomfort.

Those senior citizen skeletons referred to were found in Iraq. Not sure how common it was. However, in many historic human tribes, oldsters were considered repositories of knowledge. They would be like "Hall of Fame" keepers, gourmet chefs, judges, doctors, and librarians all rolled into one. They had strong social value, and if infirm had still high status. The advanced age of the Ns could simply be from different genetics, but it seems like their oldsters filled a similar niche as ours...a strong argument for the Ns having good linguistic skills.

This could have something to do with it:

The head of the IMF is basically saying the dollar's at the edge of a cliff. Iran has been wanting to open a Euro-based oil exchange. The US wants to stop it from doing so. A great time for a Finance Minister to do some back-room dealing.