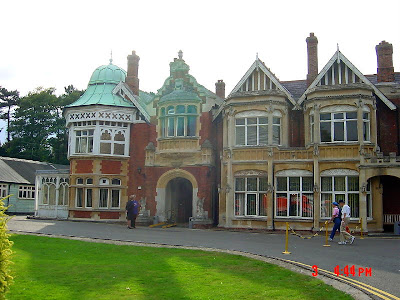 The Battle Of Bletchley Park, Science & Free Speech
WWII was won largely because German U-Boat captains were often bored. To amuse themselves in the lonely North Atlantic, they signaled to each other wirelessly and thought their signals secure.

For that reason on a squally spring day a friend named Nieves Khoury, the only Canaria resident I've had the pleasure to know, rode with me sportingly up out of London to where the fates of nations had turned. They turned, of all things, on practical applications of information theory. I wanted to see the belly of Bletchley Park, the military import of which was clear from my childhood things. The park lies about the same longitude west of London as Castle Windsor's polo field but an hour further north, off the M1 towards Buckinghamshire. Remote, yet just enough. They deciphered the Enigma code there and many others with the aid of the world's first programmable computers.

At the time I was in the delightfully disreputable field of artificial intelligence so visiting made professional sense, and for ironic measure I brought along a disowned, reprobate-turned-con-man who was the son of one Intel's founders. He faked an enthusiasm to see where Alan Turing's inference machines were first made in 1940. Their electrically actuated gears were housed in lockers which took up much of a room, then finally they used valves, or vacuum tubes, which took up even more. Which led to transistors and then to the comparatively tiny silicon chips which made Gary's disappointed father, but Gary not yet and probably never Gary, filthy rich.

To Nieves the notion of heavily armed ships and warplanes milling around at dreadful expense to kill millions of foreign homicidal maniacs was dated and inappropriate. As anachronistic as slave-holding. She and her friend Lola, who came with us, were from islands off Spain long accustomed to aggressive, pasty-skinned tourists. So they graciously kept their thoughts to themselves. We drove into the Park to see wind-blown grounds and ill-kept buildings, where a compound of decaying huts had once housed the weary boffins who fought the Battle of Bletchley. I got out of the car to walk up and look in the windows, to contemplate why the US and England prevailed. I considered patent law, competition, Jacquard looms, systems of government, economies, luck and leaders. What the scientists ate. Why did our system win? Perhaps because we had New Science, more freedom, enough openings to throw down old gods and repeat Titanomachia.

They called me back into the BMW, telling me there was nothing to see, the girls scolding me for staying out in the sideways rain. For staring oddly and too long at a reverie of dilapidated, boring buildings.

Where art and free speech flourish, so does science. When they are turned away their empty seats are always reserved for pretty falsehoods, failure's bridesmaids. Alan Turing was a very special boffin who loved truth and adored beauty, who believed the exceptions in regular patterns are so information-rich you can divine all relevant data from them; in essence, contradictions point to the most meaningful rules of life itself. He meditated on morphology. What would become known as Chaos Theory. With this intuited precept, to focus first on data's diseases and compare them to the whole, he broke open the most complex and secure codes yet devised. As with so many contradictions, he was himself the precept's social embodiment. In 1954 he was hounded to the point of suicide, having been convicted of a "crime." Homosexuality. He died of cyanide poisoning, a half-eaten apple by his side in imitation of the heroine in his favorite story. Snow White. Turing's death is why the first personal computer maker later chose a bitten apple as its logo.

Amongst acclaimed scholars (Those Who Should Know Better) it's a commonplace that the American plan to inexorably smother its hapless enemies under mountains of industrial goods was chiefly responsible for victory. As if triumph was a fait accompli, the materials merely having to be put at disposal of generals and their armies, and voila, determinism. (Stupidity.) While it was nice to luxuriate in weapons and supplies, the intelligence gleaned via math was fundamental, had far more strategic effect and was morale-crackingly lethal. Materiel had to traverse a hostile world in fragile berths. Armed with oracular knowledge of enemy movements and intents, a plodding fool such as Bernard Montgomery couldn't manage to completely negate such advantages. Even with foreknowledge of his enemy's strategy, the only reason he was able to keep Rommel away from Arabia's oil fields was because the latter's supplies were inconveniently situated at the bottom of the Mediterranean. Right where the oracles of Bletchley had put them. Montgomery became a Field Marshal, Germany tried to make oil out of turnips. Such are the impacts free speech and art impart to science, and long are the reaches of the gods which rulers worship.

In early 1942, the German Navy added a fourth rotor to their earlier Enigma coding machine, vastly increasing its mathematical complexity and regaining secrecy. In February of that year, a million tons of vital supplies bound for England and Russia were sunk in the Atlantic. Imagine, say, a million cars being sunk in a month. Then the next month 1.2 million. Then 1.5 million. Then 2 million. Who can keep that up for long? With the code unbroken, America's industrial output was on a conveyor belt to The Deep. From the Allied perspective, the war looked lost. In the eyes of most, democracy and communism were beaten by the efficiencies of fascism. Millions in Russia and many in England were starving, and weapons were short in the field. Convoy ships were sunk within sight of Miami Beach, the Naval Academy at Anapolis, in the Long Island sound, off Portland and the Carolinas. 35% of US Merchant Marine shipping losses and over 50% of its casualties during the entire conflict occurred in 1942. The pressure on the hut-dwellers in Bletchley was intense and Turing's team slept not in beds, but at desks.

On December 13th, 1942, Enigma was re-broken through toil, good guesswork and computer programming. The German Navy's commands to its U-Boat fleets began to serve as writing on the wall once more. Shipping losses from U-Boats decreased dramatically, and the submariners were baited, blasted, and bagged like sharks. Had U-Boat communication protocols been more strict, it would have taken longer to break the code; but the sheer volume of data allowed Turing and his machines to spot contradictions in patterns, to form hypotheses about what caused them, and to test those wild-ass guesses far less laboriously than was possible heretofore. His sexual orientations were overlooked long enough for that.

Stretching off to near infinity, white punch cards flurried and spinning tape rolls curled into flames. They translated information and pegged them into grids on big maps with little symbols hung upon them for sharp relief. In a bombsight's reticule, at a periscope's vortex, the fragile holds of far-off symbols gravid with troops and war-fuels were soon to be split, rent hopeless with spray and steam. Athena has on rare occasion allowed to be our goddess and from her wisdom we soon derived secret range and azimuth. Before we betrayed her it was she who ministered unfair advantages and quotidian death down upon the acolytes of Aries.

Whether above or on or under the sea they must've had last thoughts such as these: "Impossible! Noooooh! How could they ever have known...that we were here?"

Would love to hear about your latest dreams.

Thank you, Davo. I surely do hope the same. Greetings to Adelaide, where I would like to visit someday, and I'll be over to see Wombat's Waffles again soon!

Two comments. First, code breaking also won the war in the Pacific. America's fleet was mostly on the bottom of the ocean when the Navy discovered Japan's plans to invade Midway Island thanks to code breaking. Roosevelt and his generals were making plans on what to do if Japan invaded the West Coast - basically, retreat to Chicago and make a stand. Chicago! Knowing Japan's plans, the Navy was able to ambush them and the resulting battle of Midway essentially made the conclusion inevitable.

My favorite part of that story is that the codebreakers didn't know the name of the island that the Japanese were planning to invade. They suspected Midway, but weren't sure, because they didn't know the code for Midway. So, they had the Midway troops send a fake message, in a code they knew the Japanese had broken, reporting broken water desalination equipment. When they subsequently broke Japanese messages referring to the desalination equipment, they knew the code for Midway. So, while advanced mathematics is critical in code breaking, good old common sense and trickiness important too.

Also, I notice the British had the good sense to not prosecute Turing for his sexual preference until after he saved Western Civilization. Contrast that to the current American administration that has purged intelligence agencies of Arabic translators based on sexual preference while the country wages a Phony War on Terror and a very real War on The Guy Who Tried To Kill The President's Daddy. Homophobia kills.

Post length is always of concern on a blog, and I thought of breaking this post up into a series, but decided on just relating the personal story. Left out the juicy stuff about JN-25 et al.

Thanks for the Midway anecdote...where did you come across that? Not doubting, just sounds like a good source. Presumably, the Brits similarly "salted" the scent to cover their tracks. One would think routinely.

After Midway, Yamamoto must have strongly suspected the naval codes weren't secure. He was a smart cookie, and the ocean is awfully big in that area, and their war was lost right there. I was really thinking of him when I wrote that last line-"impossible!"-as the P-38s showed up out of nowhere to shoot his plane down, he knew.

Certain structures of the Japanese language make it much easier to decode. Formulaic phrasing and responses they can't help using. It's like leaving a password set as 'user.'

I realize that much if not most of the labor employed at Bletchley was for recognizing and monitoring the "fists" of the German signalers, which was arguably a bigger part of decryption than was computation. Really, I wanted to give Turing his due. The only criminal thing was what they did to him. Bastards.

Related to "fist" recognition, there is a current effort to profile keyboarding patterns and associate them with individuals. Nothing to be concerned about if you're not doing anything wrong.

OK, you got me. My reference material was the movie "Midway." (Great movie, BTW. They really knew how to make war movies back in the 70's). But after doing some research, I think I actually found a reliable source:
http://www.nsa.gov/publications/publi00023.cfm

But who knows? The NSA watches movies too, as we well know.

Regarding "fist" recognition, let me just say that I am probably your only reader to actually have used Morse code. I was a ham radio operator in my mis-spent youth (WN9JSB) for about 2 months. I was horrible. I had very few Morse communications. But I did enjoy listening to short wave radio voice broadcasts, and got a QSL card from Radio Moscow (along with plenty of propaganda). Ah, you never forget your first CIA file!