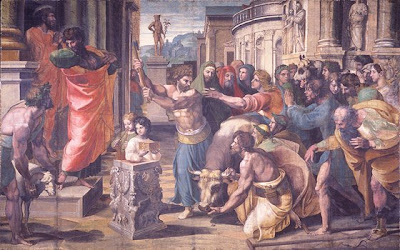 Of Monies, Markets, Minds And Gods
Monies are coin and specie, the basis of kingdoms. In the times and places where carrying much is perilous enough to precipitate bonds of trust, we create tokens, symbols of promise and obligation. Every promise, when exchanged, creates untold more, every obligation kept or broken extends over manifold relationships. When these spread and cross sufficient distance, an economy is born, formed as fecklessly as grexes chain their way across shaded forest pools, as reflexively as greens sprout under the blessings of rain and sun. Monies are the flashing fruits of the earth, intoxicating distillations of expansive holy things. When seashells or oxen are used to signify and calculate its power, the greatest invention of mankind redolently imbues humble placeholders with ostentatious shine.

Markets are crucibles made for melting gold, harbors for the rolling seas of silver which bubblingly leap on torrents of light and heat. As with all the arts of man each has its own distinctive style, one expressed on a spectrum between the high-ordained rites of Mayan sacrifice down to bashi-bazouk excesses in furtive torch-shadowed bazaars. Markets, never free, require high walls and protections if they endure to allow the veiled fundaments of ever-present fears to politely meet the vengeful, sexual howls of unslaked greed. Sometimes sublimated, sometimes not at all, amongst cultured company the activities conducted in them are often called investing.

Minds imagine reflections of Gods, law-givers who set the cycles of heaven and earth, forces which wove the tapestries of space and time. Gods whisper reasons to the great and small, channelling their motivations, suggesting what to build. Histories become legend, legends become myth, and myths are echoes of godly conversations which distantly delighted in every human action. You can discern the names of a land's Gods in its taller buildings, you can read the interpretations of their priests in statues. I write this so my children might know the circumstances which one day will seem far-off, far as another country with other gods. If, my sons, you find yourselves carried off to strange kingdoms, you must learn their deities, while remembering how easily primitive needs puncture high pretensions.

Our priests, their hearts corrupted, had us worship consumption. They betrayed gods who should not have been forgotten and traded the respect of the world to be landlords of hell. Our armies have been beaten by peasants, our gold and silver have been stolen by the courtly and squandered on destruction. The priests are gathered in dark rainments, murmuring incantations to the horned god of Optimization, they're burning offerings to the fertility goddess of Capacity Utilization. The name of their favorite spell is Arbeit Macht Frei. It is the greatest of all their lies, lies which were beloved because they seemed merciful, to the indentured. And now only the truth can set us free.

The truth. What a fantastic monument to the better instincts of the human race this country might have been, and might improbably become. If there is any road to that redemption, it will be long, and paved with truth. In the mirk beyond the firelight, I see the outlines of an altar made for sacrifice. Not another of unfortunate enemies, but of us. One torch to set righteous fire, or one to light a funeral pyre. Tomorrow we will decide what goes up on that altar, whether it will be our children or our lies. Go, souls, our bodies' guests, upon these quests and errands. Fear not to hope in the West, and the truth will be our warrant.

"To awaken people to the existence of the hitherto unknown spiritual realm is the true mission of religion."

I just don't see Cynthia McKinney getting this done working with a hostile Congress.

thanks for that quote. It's something like what I was aiming for here. The spiritual is an inescapable outgrowth of policy, because policies come from philosophies. This last one sucked.

thanks for that quote. It's something like what I was aiming for here. The spiritual is an inescapable outgrowth of policy, because policies come from philosophies. This last one sucked.

You know, these last eight years have been a crucible for some of us, and it has been purifying. It's the *one* thing I'll give GWB. Not that he ever intended this gift, but nonetheless it happened because of him, which just goes to show that God works miracles as a matter of course.

Comrade Cynthia will run the Comintern just fine after a purge or two!

And win lose or draw today I'll buy you a martini at the Luau.

Maybe miracles are just the natural creations of systemic end states, a sort of homeostatic reflex in the universe.

Same difference, I guess, though I prefer to think of there being a conscious element involved rather than the universe being nothing but some giant wave pool.

There's a book called The Tenth Dimension which you might enjoy.
http://www.tenthdimension.com/flash2.php

hey, peasant-san, thanks for the recommend--I very much believe in the role of purpose in evolution/creation, and in multiple dimensions of matter. Both hold up as scientific hypotheses, because they would explain so many things.