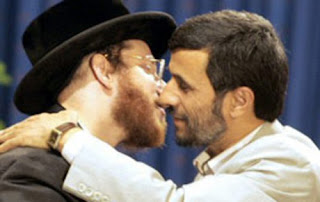 All Extremists Should Be Shot
Or at least not rewarded for bad behaviors. Extremists are the real enemies within each political party, and right now conditions are perfect for them across the globe. We're traversing the sharp, narrow ridgeback of a very tall mountain. A misstep to the left will send us down the cliff to neo-liberalism, one to the right and we careen back down into neo-fascism. We should all be quite familiar with the dicta for nation-building abroad; now it's hitting home, and best practices in such ambitious endeavors also apply to parties.

Even if it tastes bad, you help the comparative moderates in a country, you reward them and isolate the radicals. That's how you de-escalate, win the middle, and create balances of power. Democrats in the US are faced with the need for pragmatic party-building, for isolating our radicals by embracing those who are only half a bubble off plumb. I'm not referring to Democrats rebuilding the Democratic Party--Barack Obama did that during the primary and campaign. I mean Democrats urgently need to help rebuild the Republican Party. If we don't...They will.

Of course we shouldn't be just a nation of two parties, but we are, and even if we became a parliamentary system overnight it wouldn't help. So mending the compound fractures in the GOP is a priority for us all. Yes, it's great fun to watch them tear each other apart, don't get me wrong. It's a sinful pleasure watching them try to hitch their busted yachts to blazing SUVs, and to hand the keys over to someone who out-Bushes Bush (yes, the doublay was entendried). The meme going around is to let them Palienate because she's good for fund-raising among the Know-Nothings, and hope they run her or a facsimilie in 2012 so they get thrashed again. Trouble is, I recognize the danger in that outcome. It would hurt us all. And the world. Enormously.

If the Republicans move back towards the center, however, it helps us all. It would keep the Democrats honest and greatly lessen the odds of a steep drop into unworkable neo-liberalisms. The magnitude of the opportunity is huge, and it cannot be retrieved if passed up. If the Dims listen to the devils of their lower natures and play NIGYSOB ("now I got you, son of bitch") we will be sentenced to a generation of over-reach, to another vertiginous political cycle intimately connected to the boom and bust we're experiencing economically. Ergo, the Pugs must be marginalized so the Republicans become and remain a viable threat in a balance of power.

We must reach out to moderate Republicans, the ones being ousted from the inner circle. David Frum, for example. was Bush II's early speechwriter. I despise him and his wretched mistakes, but he is a reformer, he saw this coming, and has written a book called "Comeback." Time to reach out. We need people like Reihan Salam, a smart young intellectual who co-wrote "Grand New Party." We need Peggy Noonan, Jim Manzi, Ed Rollins, John McCain, Chuck Hagel, and many disparate influencers who are center-right. Even Chris Buckley and David Brooks, who function as moderate double agents.

The alternative is we'll get more of Joe the Wife-Beater (really, I've seen the court docs), Jerry Falwell, and millenial apocalypsis. We get more of people who scorn wisdom with extreme prejudice, who always choose narrow ideologies over wider common goods. We need to marginalize Karl Rove and his American Taliban, who pandered to these lower natures in exchange for Phyrric victories which benefitted an unprecious few.

This means we must dampen our impulse to interpret the election as a paean to being liberal. The collapsing economy isn't proof of capitalism's failure. Capitalism works. So does communism, but incarnations of both have to be upheld by plausible myths and regulated by authority-wielding cops who beat the hell out of those who pollute or steal from the commons. Believe it or not, there are governments in which malefactors don't get bailed out, but get jailed in.

Now is not the time to revel in Schadenfreude, or to be small-minded in victory. It is the time to be magnanimous, and glory awaits if we choose to be. There may be very little room to maneuver, but regardless of the fix we're in, the most valuable thing we can have is a government capable of governing, of making good choices and compromises. Wearing the victory lightly will help achieve that. This notion of "all governments are bad" is the result of long brainwashing, and it's a lie. Maybe, just maybe, we can build one that's even good at it. Yes we better.

(Note: I have plagiarized from many sources above. My apologies and thanks to you all.)
Posted by MarcLord at 8:56 AM

1) Your title is incendiary.
2) You just need to qualify this comment in order to win my approval, for what it's worth:

Unregulated capitalism does not work. The legendary pure freemarket is not a myth in which we should be placing our worshipful praise.

But some good phrases are well-turned in here!

Beach Bum said...
This comment has been removed by the author.
7:39 PM

Just wanted to stop by and say great post.

I mean Democrats urgently need to help rebuild the Republican Party. If we don't...They will.

I live amongst the hairy conservative savages and they are frankly dumbstruck right now and migrating to Palin. While my best guess is that Palin will fade away like Dan Quayle she, or someone like her, could rally the repubs and form another Rovian neo-fascist core for a 2012 run.
I agree with you that people like Noonan, Hagel, and as much as I hate to write this my semi-intelligent senator Lindsey Graham can be reached to some affect.

You are so right that a government needs a good opposition. When I heard Tony Blair resolve to "destroy the forces of conservatism once and for all", that was the moment I first put him before my mental firing squad. Now we once again have a good opposition, but it was hell for most of 10 years without.

But we'll all miss GWB when he's gone, surely? For verily, he hath the gift of prophecy. For when he says capitalism is not at risk, and has what it takes to set right the financial crisis, it's a cert that capitalism is doomed.

I agree with vigilante; capitalism "works" no better than Stalinism worked. Checks have to be put in place.

It is worth remembering that dogs practice a pure form of capitalism, in which the biggest dog will keep walking off with the steaks until a bigger dog emerges to challenge him. Not the kind of society I want to live in.

No pain, no gain. That is what the right understands and responds to, and respects, and frankly needs. It doesn't have to be sadistic, like they deliver in victory, but it must be just painful enough to result in an actual correction on their part. Anything less than that backfires on the left and feeds into winger memes.

Saint Barack the Obama will lead us to the promised land if we are only willing to follow him.

As soon as Obama begins using free market principles to reduce the number of abortions by more than the republicans were able to do (even though they controlled all of the guns and butter) the Hallellujah Chorus wing of the Republican Party will defect to Obama. That will leave John McCain, Dick Cheney, and Don Rumsfeld in complete control of the Halliburton Party of Death.

1) the title is meant to be incindiary on the surface, funny underneath, and meaningful when combined with the picture and the ending. I think H.L. Mencken coined the phrase, and he was making fun of the extremists in all of us.

2) capitalism does work, it's just that they've stolen the word. It means something different now after almost 30 years of screed, but not to me. I mean capitalism in the real sense, of joining capital together to make a project, and I refuse to let the extremists take the word away. and of course, if unregulated, capitalism's a fricking disaster. Q.E.D.

Lindsey Graham, well, there could be a lot worse coming from SC. I really fear the whole Rove/Palin thing, fear for our country. Yet even the spokescandidate herself is chilling out a little bit. And then of course Petraeus is planning a 2012 run. Won't that be fun.

people in the thinking wing of the right are studying the Tory Revival quite closely, and I hope they can mimic it. Not that I'd ever turn Tory, but they can be a delight to lunch with.

funny how the carney barkers of "free-market" capitalism just happen to be employed by the biggest and oldest dogs.

Agreed, and if you're looking for pain, Emanuel as WHCOS is a big signal--he's as bipartisan as a knee in the balls. And Obama is a lot tougher and more aggressive than people think.

It just has to be directed right, and the trick is to geet the moderates to help dish out pain onto the extremists. That's why I used the nation-building model: you give Maliki the lawyers, guns, and money, and then it's his job to stomp on the wackos.

LOL--love the humor, and the point. So many paradoxes in life, the Dems might be able to wave anti-abortion effectiveness in the fundies faces.

15 yards for excessive celebration in the end zone. And now you're up 30, I suppose you'll eschew the onside kick.

This sort of crystallizes an inkling I've had since the Grant Park speech, that with a cool, cerebral president, politics, or at least governing, can be nudged towards the cool and cerebral.

Here's your flag back, ref, you're gonna need it again.

Some organizational theory maintains a organizations either take on the qualities of their leader fairly rapidly, or decides to get rid of him/her.

Fortunately Obama hid from vox populi how huge of an intellect and scholar he is. This guy has consumed Lincoln, Wittgenstein, Kevin Phillips, John Adams, Jefferson, Ghandi, Saul Alinsky, and (I suspect) Plato. I've caught him directly ripping off Lincolnian language, and heard echoes of the others' arguments and data. He is beyond wonk, and if can keep breathing and being all human Quaalude, he can maybe chill this country the f-out. Tall order, but tall man.