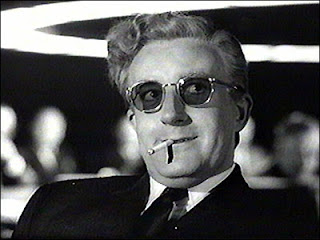 Cheney Telegraphs Nuclear Or Biological Attack With Skillful Cheer
Today Dick Cheney granted an interview to Politico, of all places. From this we know his wheelchair was not rolled into a pool of starving piranhas, that his Pumphead heart still beats and he has embarked on an internet-savvy PR campaign. We learn he owns an Amazon Kindle, that he's planning a book which will reveal how torturing people kept American soil from being attacked by external terrorists for 7 years. With the help of his earth-daughter Liz, his cloaking device worked pretty well throughout the session, so he managed to come off as remarkably life-like...at times even achieving a disarming quality. Until one examines the synthetic output:

Former Vice President Dick Cheney warned that there is a “high probability” that terrorists will attempt a catastrophic nuclear or biological attack in coming years, and said he fears the Obama administration’s policies will make it more likely the attempt will succeed.

Can't we hold this anarchist in jail, or something? He provides more specific detail of the horrific event:

Cheney said “the ultimate threat to the country” is “a 9/11-type event where the terrorists are armed with something much more dangerous than an airline ticket and a box cutter – a nuclear weapon or a biological agent of some kind” that is deployed in the middle of an American city.

“That’s the one that would involve the deaths of perhaps hundreds of thousands of people, and the one you have to spend a hell of a lot of time guarding against,” he said. “I think there’s a high probability of such an attempt."

Indeed. To approach the shock levels which followed 9/11, the loss of life from an attack would have to be at least an order of magnitude higher. So here's a red-blinking dot to connect, or not. Cheney's skillful Politico messaging was imparted just as a global threat warning was being issued by the State Department on Monday, February 2nd. A similar warning was issued to embassies and military installations on September 7th, 2001, and then updated on September 10th, 2001.

This "entity" is legion, they are in the business of threat-mongering, and where none sufficient could be conflated, they created one. That's a proven practice in their individual and collective histories as related in "To Russia, With Hate." Given the fixes necessary to feed their dreary highs, one should not disallow the proactive arming of a threat if it serves their continuing interests. Therefore, the Entities personified by Dick Cheney can be suspected as Public Enemy #1, and the threats they always pose are as serious as the mushroom clouds they're fixated upon. This is their business, this is their livelihood, and if you climb into their unhinged calculating heads you may hear questions such as these: "What's the acceptable loss, and where would it have greatest effect on funding?"

Perhaps there are such things as coincidences, the timing of the World Caution notice is mere prudence, and hopefully I'm even more paranoid than Cheney and nothing he chimed on with will happen if we stop torturing people from the third world whose uncle stole someone's goat 60 years ago and got turned in for a vendetta. Just as cheerfully I hope, probably forlornly, that Team Obama is closely monitoring the whereabouts and communications of Cheney and his associates. The most prudent thing to do would be to dispense with trials and proceed to glib denials and unfortunate accidents.
Posted by MarcLord at 3:59 PM

If Obama takes a month-long vacation, I'm going to hide in my basement

Basement? I'm waiting on the concrete delivery for the underground bunker right now.

Marc did you ever Watch BBC's The Trap?

For people like Cheney, who scaremonger, we have a word in Persian: looloo-ye (monster) sare (over) kharman (crop), which is scarecrow!

what it implies is that the scary figurine is to protect the crops from being "stolen" by the free birds ...

Of course, Cheney's comments are all part of the "George Bush protected us from terrorists" campaign, and I've had people tell me that, though how they keep a straight face is beyond me.

Rather than argue, I decided to agree with them. Furthermore, Bill Clinton was the most moral President of the 20th Century, because there was not a single blow job in the oval office after he got caught.

Know what I hate? When Cheney talks about BushCo protecting us from terrorists. What about Bank of America? What about CitiGroup? What about Wall Street? Now those have proven themselves to be the real terrorists.

If I were an anti-American terrorist, I think I would take early retirement, on the basis that my intended target had pre-empted all my effort and created more effective self-destruction than I could have ever managed with conventional or nuclear weaponry.