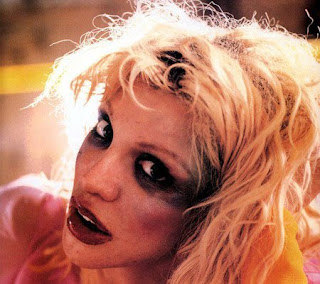 The Profane: "I'd Rather Be On A Deserted Island With A Gorilla"
The quote in the title was actor Mickey Rourke's response to the question, "Is it true you're going out with Courtney Love?" The rumor had been devoutly constructed by the Infinite Estate because of the way he looked at the expert courtesan whilst behind her on stage at the Bread and Circus awards ceremony. I have looked at Courtney Love similarly, before I even know who she was, and my thoughts were far from lustful. They were more along the lines of, "This psychotic bitch is fully capable of killing someone and enjoying it." A lot of Kurt Cobain fans are convinced she did.

Mr. Rourke has the same sentiments and expressed them in a way that made me laugh non-stop, but then I've been laughing a lot lately. Video of Mickey and female companion being ambushed by webarazzi is here.
Posted by MarcLord at 7:48 PM