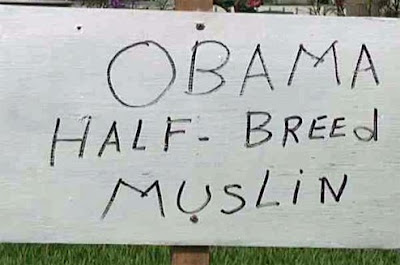 OK, So Maybe Obama Won't Win Georgia
This is the probably best signage I've seen yet out of the McCain campaign, brilliantly themed as grass-roots folk art. It's in Florida, but they filmed "In the Heat of the Night" in Georgia or Mississippi or someplace with swamps, so I'm going for the Virgil Tibbs angle. It's in a town called "Barefoot Bay." From the actual news story, here's what the man displaying the new McCain slogan has to say:

Lacasse put the sign in his front yard four days ago. ‘If I see anybody touching that sign, I got a club sitting right over there,’ Lacasse said.

The next lawn sign for McCain supporters will read: "Obama Half-Breed Muslin Lawyer."
Posted by MarcLord at 7:19 PM

Democracy's comin'
to the
u
s a

LOL, thank you Mrs. Cohen. We sure could use it!

Welp, there are "blue islands" in Georgia, such as Atlanta and some suburbs, but maybe that isn't enough to fight the "maroons."

One defining image will nail it.. heh heh heh.