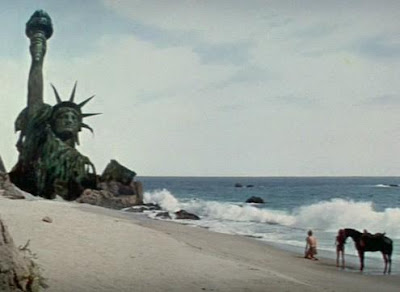 American Mania, Pt. II: "You Maniacs! You Blew It Up! Damn You! God Damn You All To Hell!"
Where to begin. The scheduled intervention fails, 777 DJIA points and $1.15 trill go ba-bye in a few hours. I've seen worse, but this falls probably somewhere in Phase 3 of the manic cycle, the part where the victims devolve into terrified grandiosities, deciding to run out into traffic because they think they're privy to the Special Knowledge and can control cars with their minds. Both they and their rescuers will become very confused and can't put together why they got hit and flew through the air, because it makes no sense. I meditate on minds, markets, and money, on religions, and quests for immortality. As it is on the micro-individual, so it is on the macro-collective.

What the hell were they thinking, and what are they doing out there? South Sea bubbles, popular delusions, madness of crowds, marathon weekend meetings, tulip crazes unwinding, dot-com business and bailout plans rejected, broken shop windows burning and can't we all just get along as the batons rain down on our Rodney-Kingness. If maniacs survive the impact, they'll just respond with indignation, and serve out venomous recriminations. When you hear those creative obscenities, it means they're almost at the end of the cycle.

In the first stage, mania is easily camouflaged in masks of optimism and bliss. When you feel great, better than great, when you're able to directly hear the music of the spheres, the twitching muscles of the bull are at your command. You expand, you swell, you exuberate, and your exuberations are infectious. You form magical ideas, dwelling on them until you assemble them into energetic arguments, so you start to run, calling others to follow, and some do.

You run faster, faster still, shedding your past self, and so you shift into the second phase of mania. Into what they call hypomania. The compass of your body is pointed at the elixir and is propelled by fire. It's pressed down into inexhaustible white embers, stoked and sheltered in your ashes, difficult for many to detect. Your animus can outlast, it can baffle and overcome all who would assail it, and you silence the doubts of the skeptics and naysayers, even the ill-advised on cocaine. Your convincing crystalline vision sweeps them aside like a UFO sweeps away Model Ts. Risks and expenses be damned, disposable servants of supernatural vision. You will change the world.

You become impatient. The slow parts of the world do not serve quickly enough, they lag, and you are surrounded by uncomprehending fools who dispense intolerable ridicule upon you. What the spheres have revealed must work, it is destiny, and these detractors are irrational simpleton. Why do they not see? They refuse your simplest requests. You have an urge to do them harm, if only it would do some good, but your mission is to help them because you're their Messiah. It's far better to show them what you mean, to construct a perilous illustration of your powers which none can deny, so you hoist upon your back the crucifix, you'll walk out onto that freeway, the oncoming Pharisees and cars at your command.

You are hit and cry. Why hast thou forsaken me? Your tired dopamine receptors, your burned dendrites and glazed synapses unlock as the pain starts to break through, and your joy circuits begin to realize they've been overladen for so long, so long. You're brought broken into a den, nay a cage, angry, angry with God, angry with those who thwarted you, angry with the ones who rescued you, angry over the passage of time, angry at the pointless waste, at the reversion to the human mean, flooding with anguish and self-doubt, wondering how to bear your unbearable humiliations, knowing and needing to reconstruct who and what you are.

Compared to the rest of the cycle, the hibernation is short. We're all going to heaven, we are all going the other way, and this is what we have to go through.

(Note: I've stolen from so many unattributed sources in this post, it's silly. If you're one of them, complain.)

It is called Coyote energy: good, even briliant ideas pushed beyond the bounds of rationality. Coyote is very clever, but is regularly getting caught with his proverbial hands in the cookie jar.

We have bear markets and bull markets. I think we need to accept the fact that we also have Coyote Markets.

Yep, bulls and bears don't really cover BushCo. Something else entirely, and coyotes have a better shot at it.

No, don't malign coyotes. This lot are some kind of horrific looting scavenger species. Some kind of insatiablly greedy, endlessly hungry mutant fuckwads.

It's noble of you to attach your final note. I was overwhelmed by your spontaneous eloquence. Even so, as a montage containing some unattributed sources, it's impressive. And touches a spot. Not your personal insanity nor mine, but it's as if we are next-door neighbour to that person and hear what's going on through thin walls.

And in every society, there are types of insanity not recognized as such until some catastrophe occurs: and then in hindsight ...

you're right, I'll get off the coyotes. At least they know when to move on, and are noble beasts by comparison.

why thank you! Stole the pic and title from Born at the Crest (a prolific political blogger I link to) and stylized the stages of mania from regular clinical sources. Was too complicated to put all the links in.