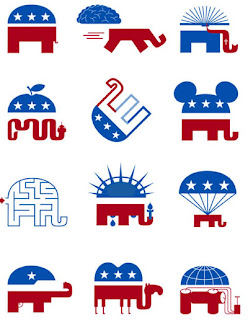 Reasons To Feel Good About the Republican Convention
I managed to catch a few of the speeches by various luminaries before last night's "Moose Head Barbie" climax, and here are a few summaries:

Mike Huckabee: "For freeing Arkansas from its Russian occupation, I heart John McCain."

The Moose Head herself was pretty impressive. Well-written, well-delivered, telegenic, roughly 25% of Sarah Palin's content was Nobama criticism, 25% hostile fabrication, 25% standard anti-government ravings, and 25% "Proud to Be A Murkin." In other words, formulaic. But for the remarkable addition of a vagina, the speech could've been written for anyone from Barry Goldwater to Steven Colbert. Listening to the Party responsible for $20 trillion in bad bonds warn against tax increases was a trifle much, of course, with the irony lost on the angry, angry crowd. A crowd which expressed its Homo Loquens sentiments as follows: "Boo. Booo! Yay. Yaay! Boooo. USA! USA! USA!"

(Aside: If a Republican wanders in here for some reason and has stuck with it this far, congratulations, and I have a question: what do you have to be angry about? Your party has been in power, has usurped more power, has exercised more power over our liberties, our finances, our allies, and our so-called enemies for the past 8 years than any other period in US history, and you're still angry. There is good news for you, a soothing Gilead's balm guaranteed to finally make you happy. Calm down for a minute, go look in a mirror, and repeat these words: "I f**ked up." Say them often, and you will start feeling better in no time.)

Speaking of feeling better, despite Sarah Palin's well-received litany of scandals, lies and deceits, the revitalized, high-energy Pugfest masks a deep rift in Republican philosophies, one which reaches deep down between McCain and the Fundie Panderers running his own campaign. Even Palin seemed to think some of the vitriol she was about to read off the prompter was going too far, acid sure to have back-splashed once the various women's focus groups which were running collate their data. The Rovian speech could be interpreted as taking a folksy Moose Head brand and transforming it into Cutthroat Opportunist.

You might call the core rift a battle between the Roots and the Shoots, a desire to deal with a plethora of contrary, dangerous details by shoe-horning them back into a narrative past. This isn't a Republican impulse--it's ancient, it's tribal, and is still the most commonly observed behavior in organizations which are in deep trouble. When facing a confusing, hostile environment, the collective decision is usually to go back to what used to work best, and try to do it harder and better. That's why (Karl Rove protege) Steve Schmidt the campaign manager who lobbied so hard for Palin, is actually trying to hide McCain as much as possible. Consider, for but one example, that Oldfinger's convention address tonight is scheduled to exactly coincide with the Giants-Redskins game which kicks off the NFL season. Palin's speech drew an audience close to 20 million. McCain won't draw 10.

The problem with the "dance with them that brung ya" behavior is that the greater the levels of confusion and danger, the less likely it will work, and sharper wits in the Republican Party realize this. In a golden media moment of illustrating that point, the feed to a microphone was left on during Chuck Todd's MSNBC show yesterday. Mike Murphy, John McCain's closest former advisor, and conservative columnist Peggy Noonan, the right's Intellectual Ballerina, talked freely amongst themselves. Contrary to their public line-toeing, they completely trashed the strategy of picking Sarah Palin. I assume you've already heard or read Noonan's damnations of, "It's over," and "The most qualified? No! I think they went for this -- excuse me-- political bullshit about narratives --" The full transcript is worth reading, and it's proof of intelligent Republicans speaking honestly.

While Palin was in some ways a brilliant choice for VP, the Republican Party is playing a bad hand with yesteryear's calculator. They're scared and confused. America needs heroes, they know that, but they're offering icons treadworn and false. The other side offers Vince Lombardi, innovation, and an exercise regimen. I see the appeal in the former, I see it in the whole country "bottoming" so hard as to remove all denials, dignities, and doubts in the hard collisions that would happen under McCain/Palin. Or, as it might well turn out, under a President Palin.

The other side offers coaches who know how to coax out the best competencies, even from the alien corporate-socialist substrate upon which patriots, governments and consumers must currently float like reviled stains of dirt. The coaches are the only feasible hope we've got left for climbing up into coherencies. Deep down, I think, even Sarah Palin and the Fundies might know that.

"Father Teresa", what you say? It takes a certain PR glitz, carefully chosen words, and 70 year old amnesia to forget the past administration; choices to make for yourself??? Did he mean Big Brother would no longer be watching you? and me? Maman

Mr Round-up...so sorry to have taken such an extended hiatus from you fabulous site. I've been busy with life and inundated/overwhelmed by the body politic. Gonna take a gander at your conglomeration of the news-I-can-use and get back to you. So good to see your face...

Say hi to the Family Lord for me and my best to you all.

I have a theory about the reason Republican voters are so angry, as you wonder in your aside. I believe they are angry because their party leaders make them angry. An angry mob doesn't ask logical questions or notice glaring inconsistencies and contradictions. Rational people respond to John McCain's saying George Bush has protected the country since 9/11 with "uh, didn't he allow us to be attacked in the first place by going on vacation when warned of an imminent attack?" Calm people react to promises of a smaller government and a balanced budget by pointing out that it was a Republican Congress with a Republican President who set records for growth of the government and the deficit.

So the leadership, through their media outlets such as Limbaugh and Fox "News" tells the mob that they are victims. The Dems are somehow to blame for the massive spending increases, they are an elite who look down on you, they want to control your life, you're under attack from strange new forces. They appeal to the reptilian brain stem, which overrides higher cognitive function in their base.

Father Teresa would be an ideal companion for Big Brother.

glad you stopped by, and thank you!