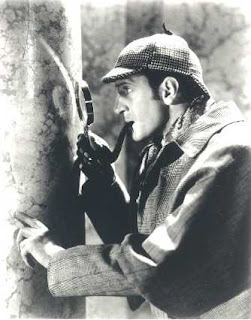 Sherlock Holmes & The Mystery Of The Stolen Plans
There's a great, damning post on the financial crisis, credibly written in the style of Sir Arthur Conan Doyle:

"Yes, we have crossed swords with the American criminal on more than one occasion and found him to be a worthy foe. As his British counterpart has lost his imagination, I suggest to you, my friend, that if the interesting cases won’t come to us, we must go to the interesting cases!”

And so it came to pass that Holmes and I embarked on a grand tour of America. My friend’s intuition had proven to be correct, and we became involved in a number of high-profile cases which attracted public notice. Holmes successfully solved the case of the kidnapped Virginia twins, Fannie Mae and Freddie Mac. In Kentucky he managed to locate a famous sporting trophy which had been missing for nine years. And in New York he was involved in the strange affair of the vanishing banks, the details of which I swore solemn oaths, at Holmes’ insistence, to leave out of my memoirs until sufficient time had passed.

After these adventures, Holmes and I eventually found ourselves at the Mayflower Hotel in Washington, D.C. Holmes was never much of a tourist; while his criminal investigations had taken him far and wide in Europe, so single-minded was my friend in pursuing the solution to a crime and the apprehension of its perpetrator that he never paused to take in the sights, wherever his travels took him. Thus it was with the greatest reluctance that he allowed me to drag him to see the various monuments and memorials in America’s capital.

“When one has wrestled on the Acropolis with Paleologos, the Greek forger,” he sniffed, “why should he then wish to be jostled by sweaty tourists from Omaha merely to catch a glimpse of structures more than two thousand years younger than the Parthenon?”

So it was with great relief that Holmes received the concierge of the Mayflower as we took tea in the salon of the hotel.

“Mr. Holmes,” the fellow said after stealthily approaching us, “may I have a private word? It is of the gravest urgency.” He threw me a furtive glance, which I took as an invitation to depart, and so rose from my chair.

“Stay where you are, Watson!” exclaimed Holmes. I froze. “My dear sir, Watson is my friend and confidant. Anything you wish to say to me, you may also say to him!”

The concierge looked at me warily, then nodded and turned his gaze back to Holmes. “Very well, sir. It’s just that I have been instructed to speak to you in the strictest confidence by the highest of authorities. This authority is waiting for you in one of our suites, and requests an urgent meeting on a matter of supreme importance.”