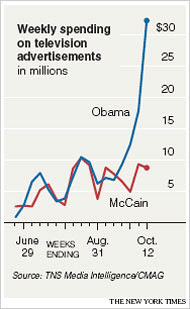 Obama Hits Stretch Run, McCain Wheezes
The Obama Campaign raked in over $150 million in September, adding 650,000 new donors. Average donation amount was $80. The election's outcome is so obvious that, in keeping with the finely honed bureaucratic instincts of a 4-star general, uber-careerist Colin Powell gave his endorsement yesterday, slamming his old friend John McCain and his choice for VP on Meet The Press. Why his endorsement is important may rankle Karma, but its effect is immediate amongst the Council on Foreign Relations crowd. 14 days and 14 nights to go, and the airwaves will be flooded with Democratic ads. They're having difficulty finding open spots for more placements.

McCain is all but conceding. CNN is quoting McCain advisers saying they believe that Colorado, Iowa, and New Mexico are gone to the strong Obama ground game. They've conceded those states, and the RNC has started to pull back funding in prep for the 2010 elections. The advisors claim their plan for electoral victory requires McCain winning Pennsylvania, plus Nevada, Virginia, Florida, North Carolina, Missouri, and Ohio, but they're trailing in all those polls, while even Georgia has tightened to within 2 points. (Pollster, RCP)

For a sense of the Obama Campaign's take on their chances in Pennsylvania, they have no plans to visit for the duration. They've gone up +10% there.
Posted by MarcLord at 10:59 PM