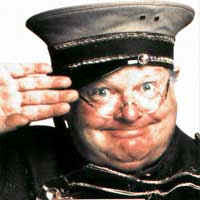 Fancy A Quick Little Capture, Pt. I?
A couple of interesting developments popped up in the wake of last week's Marine Hostage Drama. Because they're so different in tone, I'll split them into two posts.

First, the British Ministry of Defence is allowing the 15 Marines previously detained under Iran's new "Catch-and-Release Amity POW Program to sell their stories, at least the ones they write. Whereas they aren't allowed to sell live interviews. Live interviews for sums are still a no-no. So far, however, the publishing contracts total up to about $500,000. Predictably desperate Royal Marines and Commandos are probably now racing towards Iranian beaches. The resulting Monty Python routine might go something like this:

British Sailor: "Capture me! Umm...capture, please! I capitulate!"
British Officer: "Bugger off, sailor! I'm not Iranian, and this is my territorial incursion. You're compromising my operation."
Sailor: "Then your name's not on this beach, is it, guv'nah? I'll be gettin' what's mine, I will."
Officer: "I'm a Major, you fool. My publishing contract is worth a million quid. Yours is worth a big fat naught."

(Both crane their heads to look around.)

Officer: "Dammit-all, where are the sods? Hello-o-ooo! Anyone home? I demand you accept my surrendur forthwith!"
(A file of Iranian Guards appears from behind a sand dune.)
Officer: "Ah, here come my blessed Persians. Thank god. Rather I should say, 'Salaam Aleichem.'"

Officer (yelling to Iranians): "I am now your prisoner! Interrogate me strenuously."
Sailor: "We'll just see who gets the bigger publishing contract, Major."
(Sailor fires his automatic weapon over heads of Iranians, who begin to shoot back.)

Well, you can't say they're not making the best of it. I'd been meaning to watch some old Monty Python, but the recent actions of the British Navy doing its version of The Benny Hill Show will tide me over for awhile. Maybe indefinitely.
Posted by MarcLord at 12:11 PM