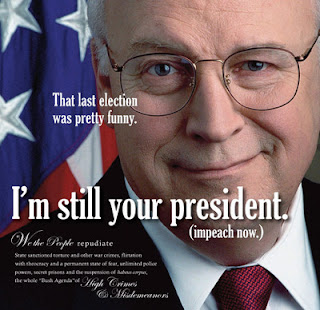 Breaking: Articles of Impeachment To Be Filed On Cheney?
Dennis Kucinich is Da Man. Quoted from the Sleuth at WaPo Online:

Rep. Dennis Kucinich (D-Ohio), the most liberal of the Democratic presidential candidates in the primary field, declared in a letter sent to his Democratic House colleagues this morning that he plans to file articles of impeachment against Vice President Dick Cheney.

Kucinich has made ending the war in Iraq the central theme of his campaign. He has even taken aim at the leading Democratic presidential candidates in the field for their votes on authorizing the war.

Article II, Section 4 of the Constitution gives Congress the authority to impeach the president, vice president and "all civil Officers of the United States" for "treason, bribery, or other high Crimes and Misdemeanors."

Sources tell the Sleuth that in light of the mass killings at Virginia Tech Monday, Kucinich's impeachment plans have been put on hold. There will be no action this week, they say.

Kucinich's office had no comment on the Congressman's "Dear Colleague" letter -- which apparently was drafted over the weekend, before the school massacre -- or on what the focus of articles of impeachment against Cheney would be.

But Kucinich shouldn't hold his breath on getting anywhere with his impeachment plan. "We'll see a Kucinich Administration before we'll see a Cheney impeachment," quipped one Democratic aide.


Here is the text of his letter, a copy of which was forwarded to the Sleuth:

This week I intend to introduce Articles of Impeachment with respect to the conduct of Vice President Cheney. Please have your staff contact my office . . . if you would like to receive a confidential copy of the document prior to its introduction in the House.

I don't see the mass killings at Virginia Tech as a serious reason not to file impeachment papers, and I don't see Kucinich backing off. It's all the better that he's seen as an outsider and isn't taken seriously because, oh, he's been right on just about everything, and he has a big schnozz, a funny name and funny hair. Maybe this is the Stealth Impeachment. If nothing else, it'll be on the historic record, and that is Progress. If he files the papers, I will be sending Den-K's campaign some money-love.