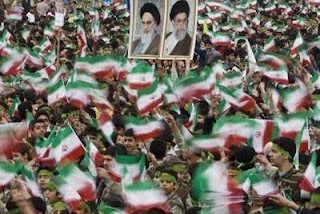 Happy Anniversary, Iran
Thirty years ago today the Iranian people threw a US Proxy Playboy-Thug out of their country, assuring their entry into an elite club: "Nations Which Must Forever Remain On the Hit List Until They Are Dead Dead Dead."

Mohammad Khatami, a moderate former President, has stepped back up to run again. Oddly, he was President until Iran's first election after, umm, when was that? Oh, yeah. The election came after America invaded Afghanistan, then Iraq. So Iranians reacted to aggression right next to them on two sides by electing the tough-talking and wily Mahmoud Ahmadinejad, former mayor of Tehran.

Now an olive branch has been extended by the Obama Administration. Yes, I know, the nature of that branch can be quibbled over. Still, you have to admit that whatever it is, it's something other than putting gigantic blinking neon "F%!# You" signs on 5 or 10 or 20 aircraft carriers and trolling them up and down the coast 24 hours a day for 6 years. And because he would like to stay elected, Ahmadinejad says Iran is ready for talks with the US. A little confidence, reason, and de-escalation might go a long way.

(In power calculus terms, of course, this means Israel has little choice but to send in commandos with prominent "I Heart the Ayatollah" tattoos on their chests and backs to take over Georgetown University for a week and a half.)

You forgot to send 3D glasses so we could get the full effect of the photo.

If I did that, you'd have to kill me.

Ah you inspired me to remember what the "victory of anniversary meant to me"
Should be popping up soon :)

If I ever end up writing, will you edit me please? :)

Marc, the Shah was really not worse than these dudes we are living with now. His problem was that he was trying to be diplomatically 'unnice' to Americans. That is why they toppled him! He was not quite a puppet as the myth is having us believe.

Carter found the pretext of "humans rights abuse" to pressure him! But, the humans rights abuse was not nearly as bad as what we got after. the same actors, changed clothes, grew beards and became even more deranged torturers, this time backed by "oh so untouchable Islam". It is not the Shah that America controlled; it was the thugs.

Shah's biggest problem was that he was not cruel enough. He was not ruthless enough. His father was and he achieved far more. The IRI is ruthless and is achieving all that Shah had wished for Iran.

Had the Shah been a cruel dictator, as you are made to believe, he would have killed all these mullahs.

People were not really suffering under the Shah. It was a populist slogan that the revolution came to bring equality; it was the commuist's slogan, it was Kremlin's campaign to reduce American influence in Tehran.

In Iran, you cannot conduct proper statistics today! Even if you are doing medical research you are under watch and your questionnaire might end up being your prison sentence. But taxis are where you get the pulse of a nation. And for years, in taxis, I heard people, ordinary ones, poor ones, working ones, wishing for Shah's days, remembering the comforts they had fondly.

And all this revolution achieved was to replace a glitzy monarchy with a seemingly religious one, without the shine. The thief Prince is now replaced by the thief Ayatollah.