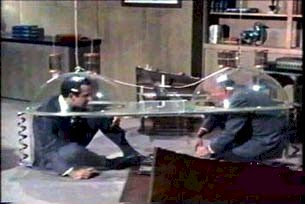 Diane Feinstein Speaks Under The Cone Of Dumbness
Do you remember the "Cone of Silence" that never seemed to work the in the old TV comedy "Get Smart?" Well in Washington, DC, we have the Cone of Dumbness. It extends around the Beltway which surrounds the city, and every time an event is officially predicted or analyzed it usually occurs under that dome. Even so, if you're head of the Senate Intelligence Committee, you might want to consider not saying things like this:

At a hearing, Feinstein expressed surprise over Pakistani opposition to the campaign of Predator-launched CIA missile strikes against Islamic extremist targets along Pakistan's northwestern border.

"As I understand it, these are flown out of a Pakistani base," she said.

You can be vicious. You can be stupid. And you can be viciously stupid. Feinstein just moved the Fall of Pakistan up to this calendar year. Predator drone strikes that kill people's families at dawn are perceived as being worse than the Taliban pulling men out of a marketplace and executing them. I can see why military folk might not "get" that. But if we can't get better out of our leadership, there really is going to be a Global War On Terror, for real, and my side will lose. Get Smart, Obama.

Oh, and all those nice things I just said about women? Do not apply to Diane Feinstein. Now if you excuse me, I have people to go kill.
Posted by MarcLord at 6:20 PM

I actually was trying to leave a comment for the V-Day post, but the commenting doesn't seem to be working. So, anywho, about the V-Day post:

Oh, Marc, lemme tell you, if my husband had written that, he most certainly would have gotten laid.

And yeah, Diane Feinstein can be a real dummy at times. Dummy a la Fred Sanford "Ya Big Dummy!"

thanks! I may be a Big Dummy sometimes, but this was what we in the trade call a "smart move."

I considered becoming a guitar player to get laid, but tried my hand at football and had a knack for it. It was pretty much all downhill from there.

My best to your man, and remember he's got to put up with a beautiful, smart, and probably ruthless woman like I do, too. ;-)