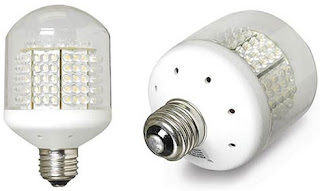 Lab Breakthrough To Bring LED Lights To The Masses
They last for over 50 years, produce 7 times more lumens per watt than filament bulbs, and they avoid breakage and disposal dangers posed by mercury vapor. A 70-watt LED light costs $60, prohibitive for most people living on the grid. But soon the same LED light will cost $6, allowing huge home electricity savings and other applications:

However, with funding from the Engineering and Physical Sciences Research Council (EPSRC), the Cambridge University based Centre for Gallium Nitride has developed a new way of making GaN which could produce LEDs for a tenth of current prices.

GaN, grown in labs on expensive sapphire wafers since the 1990s, can now be grown on silicon wafers. This lower cost method could mean cheap mass produced LEDs become widely available for lighting homes and offices in the next five years.

Based on current results, GaN LED lights in every home and office could cut the proportion of UK electricity used for lights from 20% to 5%. That means we could close or not need to replace eight power stations.

Well, I'm very happy with my LED reading stalk, though it puts a yellow halo round the page of Crime and Punishment that I read in bed.

These folded-up fluorescent tubes that European law is foisting upon us in place of incandescent Edison bulbs have a flicker that upsets some people, so it will be good if that bit of dictatorship-in-the-home doesn't last too long.

We have a gradual LED wake-up lamp by the bed, so effective it is rarely used.

Fluorescent law? Wasn't aware, but I know that damned observable frequency jitter. Btw, finally left a response to your challenge.

Makes you wonder what other technologies have been sitting locked up on the top shelf in the NWO vault.

The wind and the waves shall obey my will, peace, be still. Don't pay no mind to my crying eyes which could supply waterwheels, nor to the sun which burns my white skin.

Well, I'm very happy with my LED reading stalk, though it puts a yellow halo round the page of Crime and Punishment that I read in bed.