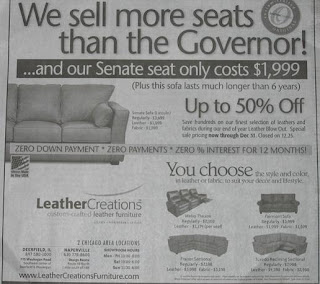 Blagojevich Might Skate, Pt. II
Soon after the Blago complaint was announced by Patrick Fitzgerald, I described it as a unique case, with profound implications for future lobbyists and politicians in the event of a conviction. In reading the complaint, there was no clear evidence of actual crime, contrary to what was being said in the media. Crime was intended, yes, but not consummated, and intended malfeasance is conjoined with US politics like a...you actually don't want to know my mental imagery right now. Really. Point being, Nixon wasn't impeached and jailed and other pols weren't nailed for wanting to be criminals, but for being criminals, past-tense.

I'm trying not to admire Blagojevich, uncouth as he is, corrupt as he may be. Yet he took cool appraisal of a foregone situation, stood up and told his accusors to go *$(* themselves, and professed to go about his job while circling the pay-to-play wagons. The circling must have been pretty effective, and the guy knows how to make the best of a coming impeachment (Update: since starting to post this, Illinois reps voted 114-1 to impeach).

Next, he lawfully selected Roland Burris, his (African-American) former fund raiser to fill Obama's seat, then sat back to watch Majority Leader Harry Reid light his own ass on fire, along with 50 of his Senateers. (Everyone has a talent. It doesn't mean they have to use it. And as Reid's Empty Threat Syndrome progresses, I reflect on the rising stock of Biden as Veep, he being President of the Senate and all.) They disgraced themselves by ignoring various laws, case precedents, and Constitutions to vow to not seat Burris--Marcy Wheeler at Empty Wheel has the nitty legal gritties on it, as usual. Obama himself narrowly avoided broiling his own ass, belatedly endorsing Burris. The disapproval and hokum is understandable, to a degree. A likely felon gets to name a Senator by decree. But haven't we seen enough of Congress and the White House trying to wriggle out of the law, sometimes merely on the basis of some compliant professor's opinion?

At the end of their 30-day time limit on January 6th, Patrick Fitzgerald's team failed to file an indictment, and instead asked the judge for a 90-day extension. 90 days! Doesn't sound like they've got their act together, or maybe much of a case. And that's coming from me, one of Fitzgerald's big admirers. He put Blago's predecessor in Illinois, George Ryan, behind bars for 6-1/2 years, and somehow managed to get Dick Cheney's long-time assistant convicted.

One would think that Fitz's best chance of making the conspiracy charges stick is to go back to the Chicago Style Politics crowd he's already put behind bars, and start playing carrots and baseball bats. He also will squeeze or indict somebody else in the Blago ring during the 90-day extension period (assuming it's granted). Even so, how easy can it be to get a conspiracy case to stick, when the conspiracy demonstrably failed? The positives here, and they're big positives, are that an effort to sell a Senator's seat failed because the takers were too cautious, Team Obama didn't play ball, and Blago's already been convicted in the biggest court of all: Public Opinion. Jail time would be gravy.
Posted by MarcLord at 3:41 PM

Headline from the Chicago Sun-Times: Why blacks are refusing to condemn gov
He's seen as 'inclusive' -- and 'innocent until proven guilty'

We should look at this issue from the persepctive of sociologoists rather than puritans. Puritans want to avoid the taint of "evil". Sociologists would observe that loyality earned from the oppressed is not easily lost. In that, America should take hope.

a thought-provoking comment, and I'm not sure what you mean yet. I get part of it, I think. Blago offered the seat to a black Democratic Illinois congressman, who turned the offer down. Apparently Burris contacted Blago first and said he wanted to be under consideration. And Thripe J was the only other named contender, so they were all African-American. The press framed the Burris pick as an eff-you because of race, but it appears he wanted a person of color to fill the seat all along.

I mean people who have first hand knowledge of how people can get ramrodded by a system tend to wait until the dust clears...especially if that person has been nice to them.

South Side Chicago politics requires a pol understanding loyality is based upon symmetry. Blacks don't reject the law, they just want a level playing field (and they know first hand that some fields are more level than others.) This is also why gangs that provide services can survive. Even Hamas survives because they fill a fundamental community need. Puritans keep trying to go into the light.

Besides, the Blaggo loyalty is exemplified by the senate pick, not defined by it. Blaggo may not have been a BFF, but he wasn't a frenemy, either. He could walk the streets at night.

So south-side blacks look the other way when it's good for them, like now?

Blago's crew has many qualities of a gang, as it should under machine politics, in which you argue but vote the way you're told. Blago trades Burris for community loyalty, which he'll need later? (Sorry, haven't lived there.)

Funny how that light always seems to shine from a circling helicopter.

I have a good friend who hails from Chicago, and she told me stories of Blago shaking down not only the Children's Hospital (despicable) but also March of Dimes local chapter (even more despicable). The man is, by all accounts, crookeder than a dog's hind leg. However, I try to remember that crooked though they may be, even the Great John Gotti had his good side. It was a narrow side, but a good side all the same.
She also told us of just how corrupt everything in Chicago is, and how even the toll collectors get the shakedown from their supervisors on a regular basis.
Chicago politics is still all Dillinger and Wild Wild West - and if anything, it leaves us with a good laugh occasionally.

so if Blago isn't a departure from the norm there, what's with the whole PNG (persona non grata) thing?? Did he piss someone off in particular, or is this a Durbin-Obama reform wing effort to kill Da Ward machines?