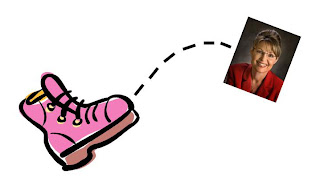 Does Life Begin At Rape For The Republican Base?

What with the recent excitements and claims on time, I've sat too long on a news article Lord Wife passed on from The Frontiersman, Alaska's newspaper. It's just the story those Special Republicans in your life need to know about: Sarah Palin isn't pro-woman. She's more like a Moosellini, and she was for rape before she was against it. Once upon a time, back in 2000, then-governor Tony Knowles signed a law expressly intended to stop the Wassila police department from charging rape victims for their post-assault exams:

The new law makes it illegal for any law enforcement agency to bill victims or victims insurance companies for the costs of examinations that take place to collect evidence of a sexual assault or determine if a sexual assault did occur.

When the law was passed, Police Chief Charlie Fannon's reaction was to bitch that it might cost his department an extra $5,000 to 14,000 per year. Who was responsible for such blatancy? Sarah Palin. Yep. Charisma-saurus fired Fannon's predecessor in 1997, a man who had not thought it appropriate to bill rape victims $1,200 for their "rape exam kits." And don't tell me she wasn't aware of what was going on: the governor of Alaska publicly slapped her policy down.

The story of how Sarah Palin privatized rape in Wasilla is spreading through the blogsphere. Hopefully it will reach mainstream coverage, as it should on oppugnant Base States like North Carolina which jackboot their rape victims in similar fashion. It's not benign neglect. This is the lowest, most niggardly, mean-spirited, screwed-up pie-eyed pile of puritan crap in the whole vile bumper crop of government-as-business bullshit. It's preying on victims at their most violated and vulnerable, as in, "Oh, you were raped? How unfortunate. Here's our $2,000 bill for your police exam, doctor's exam, lab tests, and nurse assistance."

I made a $10 donation to Planned Parenthood in her name, and the thank-you recipient is the McCain campaign, as suggested by Firedoglake affiliate TBogg:

In discussions with various people in my real life (not the Demonic Conservative Ridicule Machine I play at night) I find that people are willing to brush off or justify Sarah Palin's lack of experience, qualifications or, well. smarts because of her novelty factor. But the one thing that stops them dead in their tracks is the story of Sarah Palin and the Pay As You Go Rape Kits:

I sat with a rape victim during the “harvesting of evidence”. Mascara smeared eyes stared blankly out from a cave of shame. “We’ve got swimmers,” announced the forensic tech in the lab next door. My friend didn’t look surprised. In her 60’s, she was still asked if she felt the need for emergency contraception. Surviving the process would have only been compounded and made worse with an itemized bill; victimized twice courtesy of Sarah Palin and the city of Wasilla.

Much can be learned about the Palin Administration’s family values from reviewing their spending priorities. Former Chief of Police Irl Stambaugh included forensic rape kits (up to $1,200 per kit) in his budget requests. He was fired by Palin in 1997. In her termination letter, Palin wrote, “…I do not feel I have your full support in my efforts to govern the city of Wasilla. Therefore I intend to terminate your employment. . . ” Staumbaugh headed the police department since it was created in 1993. Before that, he served 22 years with the Anchorage Police Department rising to the rank of captain. Sarah Palin hired Charlie Fannon as the new Wasilla Chief of Police and said it was one of her best decisions as mayor. Fannon eliminated the forensic rape kits from the budget. Though the number of rapes weren’t reported, Fannon claimed it would save Wasilla taxpayers $5,000 to $14,000 a year.

When Eric Croft, a Democrat Legislator from Anchorage, learned of Wasilla’s policy, he drafted HB 270, which Governor Tony Knowles signed into law. The new law made it illegal for any law enforcement agency to bill victims or victims’ insurance companies for the costs of examinations to collect evidence of a sexual assault or determine if a sexual assault actually occurred. Upon signing the law, Governor Knowles said, “We would never bill the victim of a burglary for the cost of gathering evidence, nor should we bill rape victims just because the crime scene happens to be their bodies.”

Wasilla Police Chief Fannon protested the new law stating it would require the city and communities to come up with more funds to cover the costs of the forensic exams. Really? Are the true costs of sexual assault and forcible rape in a community only measured and reflected in the dollars spent on the forensic rape kit?

God only knows how Sarah Palin would answer that question and, as we well know, she ain't talkin'.

Fortunately the state of Alaska saw fit to remedy the benign neglect that characterized Pailn's attitude towards rape victims. But there is still something that you can do for all women in all fifty states since they can hardly count on Vice President Palin to look out for anything other than her own blind ambition.

Per an email I received last night (and also noted here):

Instead of us all sending around more emails about how horrible Sarah Palin is, let's all make a donation to Planned Parenthood.

And here's the good part: when you make a donation to PP in her name, they'll send her a card telling her that the donation has been made in her honor.

You'll need to fill in the address to let PP know where to send the "in Sarah Palin's honor" card. I suggest you use the address for the McCain campaign headquarters, which is:

PS make sure you use that link above or choose the pulldown of Donate--Honorary or Memorial Donations, not the regular "Donate Online"

The minimum donation is $5 ...and did I mention that it's tax deductible?

Being a slow blogger has its rewards: ABC News is reporting online that Sarah Palin actively impeded and de-funded an anti-rape initiative in Alaska, a state which has the highest rate of sexual assault in the country. The initiative was formulated by Public Safety Commissioner Dan Moneghan, whom she fired.
Posted by MarcLord at 10:36 AM

thanks for the ROTFL

given that you are spam, I don't need to respond. But sadly, I did like McCain's Brain, so I won't delete you.

The Daily Show did make a brief reference to Palin's "charge the victim" efforts. But thanks for documenting it and helping to spread the word. Jon

Palin also stated that if one of her daughters were raped, she wouldn't get her an abortion. This is part of her religious belief system, as it is with many Catholics and other varieties of fundamentalists. See, "God" decided that little soul should get itself down here to earth, via any means, and it's a SIN to kill off even the spawn of a rape.
(mutters to self, "If men were the ones getting pregnant...")

I understand your frustration. But I strangely feel the need to defend people with religious beliefs about abortion. I too would never have an abortion - but as you point out, that's a relatively easy choice for me to make.

Where we need to focus, I believe, is on the belief some people have that they should use the power of the government to impose their religious beliefs on others. This desire to enforce their own moral code on others, part of fascism, is natural ("it's good to be the king") but very un-American.

If the government has the power to strap women down and force them to deliver, the government can make communion illegal (Henry VIII) or make us all wear magic underwear. The government could even force women to undergo abortions if it deemed it desirable.

I say tolerate the religious belief, but not the fascist belief. And we should all agree that preventing unwanted pregnancies is the best way to reduce abortions. (shameless plug: http://heisnotdeadyet.blogspot.com/2008/09/riddle-me-this.html)

After having kid(s), my position on abortion as a whole evolved quite a bit. That said, the Pug position has generally less to do with abortion than with Sex Control. The technology for preventing unwanted pregnancies promotes promiscuity, which in turn has deleterious effects on community (i.e. church). That's really what they're freaked out about, and I empathize with them.

In other countries, the first tri-mester is the line of legality, and the morning-after pill is the preferred prevention. These seem to strike a reasonable balance. The history part of me recognizes that a woman's right to choose is always the final arbiter, but social conventions probably shouldn't trivialize that choice.