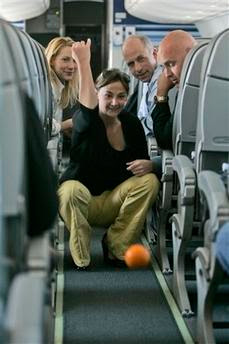 They Really Need An Opponent Soon
Advisers to Republican presidential candidate Senator John McCain watch as press secretary Brooke Buchanan tosses an orange down the aisle during a bowling game on board the campaign charter airplane, Friday, April 11th, 2008.

(Via picture of the day at Born at the Crest of Empire, now linked to in right margin.)