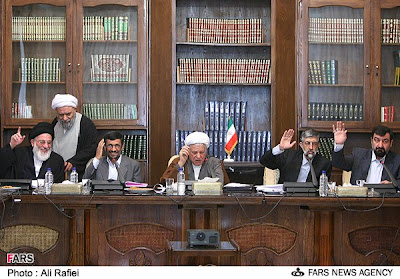 All In Favor Of Annoying Dick Cheney, Say "Aye"
These are the men who run Iran. Each has his own backers, each has their own angle, baggage, rivalry, and pathology. Here there surely be rogues, murderers, religious fanatics, and enemies, too. Right? Sure. But with enemies like these, maybe they should be friends.

Let's take a look at what these Evil-Doers have done. They defeated America's proxies (Shah Rezah Pahlevi and Saddam Hussein) in determined succession and great cost. They turned Ahmad Chalabi into one of the most successful intelligence agents of all time, and killed two birds with one stone: used the US to take out their implacable foe and bleed Israel's benefactor dry. They also trained and financed Hezbollah in Lebanon, which paid off by handing Israel, formerly the most admired fighting force in the world, a resounding defeat. That's either the most incredible run of luck in statecraft, or somebody who runs Iran is pretty good at this stuff. Possibly so good that almost no one gives them credit for it.

A dossier on Chalabi: he's a banker, born in Iraq but married to a Lebanese, and convicted for fraud in Jordan. After becoming head of the US-funded Iraqi National Congress, he supplied the neocons with a Saddam defector known as 'Curveball.' This agent gave up copious amounts of false WMD information, those dubious juices used to justify invasion. All along, Chalabi had known ties to Iranian intelligence, met with their top Hezbollah general numerous times for more than two decades, and he arranged meetings with the top UN weapons inspector in 1997.

The US entered a horse-race with a mule. Chalabi had also studied cryptography at MIT ("duh" is the word which springs to mind) and let the Iranians know their codes had been broken in 2004. He was finally arrested by US troops at his house in Iraq, dragged away with a .45 held to his head. Pentagon civilian employees were then polygraphed up the wazoos, but Chalabi was released without explanation. He was prominently placed behind the US President at a State of the Union address and was supposed to become Iraq's Prime Minister (but was so hated by the Iraqis he didn't gain a single seat in parliament). He was introduced to the American people by its President as "the George Washington of Iraq." He's still in the Iraqi government as an appointee, in charge of the "Iraq Services Committee," and was referenced favorably by super-warrior General David Petraeus only six months ago. (Ummm...why isn't Chalabi dead?)

Rafsanjani and the other guys must wake up every day, yawn contentedly, and say, "Thank God for Ahmad Chalabi. And for American stupidity." True, maybe they were lucky to hit paydirt with him. Few rational beings would dare count on such deformed incompetence. But if they had they been dumb, or hotheads like ours, they also would've inflamed Iraq in order to expel the US at the cost of their country's longer-term stability. They knew the conflict would spill over if they stoked it, so they resisted the temptation, and at this point they're actually trying to hold Iraq together and have told Al-Sadr to cool it. Meanwhile Petraeus is in as CENTCOM commander, Dick Cheney has been talking to Pravda on the Potomac again about nuking Iran, and HRC weighed in with her own "we will obliterate them" comment. So we're now threatening to attack Iraq's best stabilizing influence. You can't fix stupid. But it does die.

The smart course was to let America slowly bleed its might away right next to them. They've played their game flawlessly against Israel, Iraq, and the US, making no strategic errors during the time of the hyper-aggressive Bush Doctrine. They've showed low cunning tempered by high wisdom and restraint, and history will probably remember them as the brilliant and direct victors over a superpower. Citizens desire many things of their leaders, but the first should be for peace, the second for victory. Unlike our leaders, they have excelled at delivering both.
Posted by MarcLord at 4:39 PM

If Bush had ever had military experience, I would speculate that he'd been taken prisoner and made a Manchurian candidate. But if he's not been brain washed, the only options left are stupid or evil.

True, their purposes have been extremely well served. Let's throw in the oil revenue, a point I missed in the essay. I would love, love, LOVE $120 per barrel oil if I were Rafsanjani. Its up 30x over the past 20 years.

Ine the stupid or evil front, the Bush kids' nickname for their mother Barbara was "the Ballbuster." Which argues for not being stupid.

Manufacturers of heavy construction equipment are being particularly hard hit by the current record prices of commodities, such as steel, oil, iron ore and rubber. Yes. we have a great industry. I want to buy this equipments at komatpillar.com