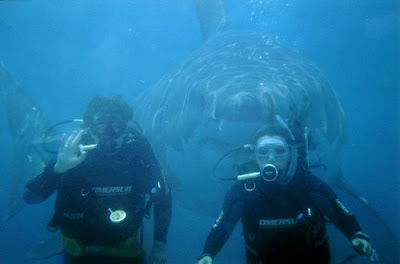 "Wave Back At The Camera, Honey!"
Fleming Lee's essay on Open Minds and Liars deftly sums up the case against reflexive skepticism as a falsely safe harbor. Immediately dismissing what one doesn't understand or see has always seemed a dangerous proposition to me, but I'm in a minority on that point, and in the land of the blind, a one-eyed man gets stoned to death. I often feel like the person taking the picture above must have felt, with a gigantic shark looming right behind friends, lacking the skills to get them to see a really important point. I soldier on to annoy another day, reading things like The Black Swan or The Intention Experiment. Skepticism borders on cynicism, which while fashionable is neither realistic nor tough. It's paralyzing and fearful, and often an excuse for not trying. Here's Fleming's take:

I’m puzzled by people who are so cocky about having a complete knowledge of Reality that they are first to raise their hands and clamor to “debunk” a UFO sighting or even a strong premonition or clairvoyant or other “extrasensory” experience. For years, since the early experiments of Dr. Rhine at Duke University and long before, it has been obvious to any informed, reasonable person that ESP and clairvoyance and precognition and poltergeists are part of reality – and yet those prideful hand-wavers have always claimed that whatever doesn’t fit into one of the little compartments in their smooth-worn desks cannot have happened. For such people the latest “science” is always the last word about Reality. They remind me of a very intelligent schoolmate of mine who, half a century ago, was fond of proving to me, with quotations from experts, that no spacecraft would ever be able to escape Earth’s orbit. He sounded like the sound and sensible mind, and I like the wild visionary . . . for awhile.

Believe it or not, I am quite skeptical myself, and very sensitive to chicanery, but I would never think that with my limited sensory apparatus functioning in one tiny nook in the universe I am qualified to judge that every earnest person who reports certain kinds of “inexplicable” experiences is either lying or deluded.

Why do I have a mentality that has always said that I know hardly anything about the universe and its great depths? When something “odd” is reported – something that does not fit into the current “scientific” description of possibilities – I do not assume it is a sign that the person who reports it is dishonest or hallucinating, but rather that it may be an exciting indication that science has not caught up with Reality. If something happens which clearly contradicts the conventional wisdom, it opens a new gate of discovery. I have therefore been, since my early teens, an excited collector of “strange” phenomena which seem to contradict conventional assumptions. In that way I and others like me have worked toward throwing light on aspects of reality which have been mistakenly overlooked or rejected. You cannot allow a system to stand which says that, “Every penguin is black and white”, when an occasional blue and yellow penguin waddles by. I, for one, cheer for the blue and yellow penguin, while the “debunkers” will go to any extreme to ignore its existence and assert that those who saw it had to be hallucinating.

One problem in the whole picture is that there are people who seem to have almost no critical capacity and who are so credulous that they will accept even the most nonsensical notions. They are as eager to believe as the debunkers are not to believe. Based on reason and common sense as well as intuition, I have rejected a number of accounts. Within 10 pages after picking up a book by one Ram Dass (Richard Alpert), I concluded, “This man is lying” and put the book down. I’ve rejected, mostly on internal evidence, many tales of the “paranormal” and “spirit worlds”.

Yes, I can feel when my leg is being pulled, but I first give the benefit of the doubt to the narrator. Sometimes my willingness to listen has been misguided. The Englishwoman I was close to for several years when I lived in her country was fond of talking about her days at a girls’ school in Paris. She told me colorful tales of her life at the school and the impish tricks she played on other schoolgirls. Her sister then revealed to me that Jill had never been to a girls’ school, much less a school in Paris. If I hadn’t been an American fresh from "out there" I would have realized sooner that a woman born and raised in Manchester wouldn’t normally speak exactly like the queen of England, and that owning duplicates of the royal corgis was an affectation. That was an example of a poseur trying to create an artificial image, and it hurt no one but herself, but there are far worse consequences of prevarication in the political world, as when presidents like Franklin Delano Roosevelt, Lyndon Johnson, and George W. Bush lie in order to push their country into wars. It pays to be reasonably skeptical and to have well-tuned antennae for insincerity and wide eyed gullibility.

I’m beginning to wander into a misplaced essay on falsehood, and so I’ll return to repeat my main point – that those who feel that skepticism is always a safe position are usually wrong, and that an open mind concerning unexplained phenomena serves the cause of truth.

Manufacturers of heavy construction equipment are being particularly hard hit by the current record prices of commodities, such as steel, oil, iron ore and rubber. Yes. we have a great industry. I want to buy this equipments at komatpillar.com