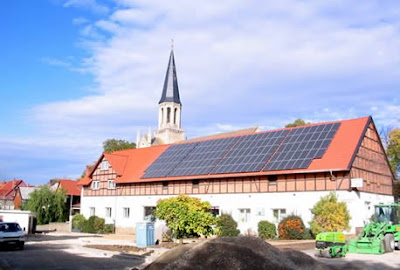 I Have Seen The Future, Baby: Competitive Environmentalism
Like librul tree-huggers everywhere, while my morning latte is being whipped up by a time-automated Gaggia espresso machine set on 'stun,' I roll out of bed straight onto my secret prayer rug, prostrate myself in the direction of Mecca, and thank Allah for preserving the body and soul of Osama bin Laden.

When that's out of the way, I come downstairs in my hemp pajamas and test the frothiness of my one-percent-raw-milk-and-soy Caffe Vita, considering my daily questions: "What can I do to make my family look like we're consuming less resources than we actually are? How can we single-handedly blunt Global Climate Destabilization, and out-do our friends and neighbors in the environmental arts?"

As previously reported, I tried going the bio-fuels route with the newest diesel station wagon Mercedes sold in North America. Of course, that still means the car is 21 years old, come of age at last. Driving vintage vehicles is curiously exhilarating, and while your gleaming bodywork swans along to admiring glances, your arm casually draped on the window, you're terrified and thinking, "Gee, I hope there's a downhill parking spot open. The sunroof will leak, but at least pointed downhill it'll probably star--shit! I forgot the window won't roll back up." Still, other drivers have stopped me on the street to ejaculate, "Wow! How did you find that baby? I've been looking 5 years for one of those! Are you turning it into a grease-car?" The Merc generates enviro-cache' and, as a bonus, the mortification of the perfectly passive-aggressive Andersons three houses up the street, bio-diesel burners and cut-throat competitors, what with their VW Passat TDI only being 4 years old. After upping the ante, I detected hints of degage' on Mr. Anderson's part, a certain constraint. Inside a week, he started biking to and from work.

Luckily I'd held one card in reserve--the commute for both Lord Wife and I is approximately 40 feet each way, having mindfully structured our lives so we could work at home. The opportunity for a well-sharpened riposte came at a neighborhood block party. During a thought-provoking conversation about Peak Oil, how to make our neighborhood more walkable, the desired elimination of plastic bag usage and the possible multiplier effects of a Venezuelan oil embargo on prices, I let slip my stiletto within Mr. Anderson's range of hearing--"we're lucky. Working from home truly lessens our dependence on oil, although we started out for different reasons. For the children." His jaw slowly clenched, his ears quietly reddened, a Belgian beer was left half-finished. "Ha," I thought, "that'll settle his hash for awhile." Two weekends later, an array of ultra-high-tech German solar panels appeared on the roof of the Andersons' porch, robotically, teutonically turning to drink in the sun at the most advantageous angles.

Dear Allah: may Mr. Anderson rot in hell. Even if the wonder-panels weren't perpetually back-ordered (despite costing $7500 apiece), our house faces northward, and positioning the status-enhancing devices so they can be seen from the street would severely curtail their efficiency, a fact of which Anderson was well aware. So for right now, I put a chicken coop out front as a quick stop-gap, and we're raising speckled game hens on organic worms. Longer term, I'm having an architect draw up plans for an attractive home sewage treatment plant made from reclaimed materials, one which will safely turn our poo into compost by pedaling an attached bicycle. This old 'hood won't know what hit it. As for those kraut-made solar panels? They'll just have to go out back.

First, I thought it interesting to note that the coffee bean (object of your first paragraph's adoration) was first domesticated in Ethiopia, bringing you that much closer to Allah.

Second, I must mention the much-overlooked environmentally friendly sweatshirt. In the winters here in the frozen tundra, I keep the thermostat at 71 as a peak; less during the day and nights. Many's a time when my children whine to me about it being to cold; often, I look at them and see they're wearing short sleeve T shirts. They get no sympathy.

(sidenote to the IRS: yes, I too work from home, and yes, I keep the thermostat at 60 during the day. I am cheap. Allah Akbar)

Lord Wife was raised in Manhattan, the Mecca of money. Her method of lowering the thermostat, as she learned from early childhood, is to throw a few windows open.

Remember that song back in the '70s, "Junkfood Junkie?" About the guy who had to hide Twinkies and white sugar and pig out on them sinfully at night. It's going to be like that here in about another year, only with energy.

Attaboy! I award you honorary membership of the English suburban bourgeoisie.

It's even worse than all that, Vincent: we live in the city, and are what passes for middle class these days!

Give it up, sister!

Cheers to you in Eastern Canuckia. Remember, spring is coming. (About two months after it gets to me.)

If you wish forr tto grow your experience only
keep visiting this web page and be updated with the most up-to-date gossip posted here.

You may be eligible for a new government solar program.
Click here to find out if you qualify now!