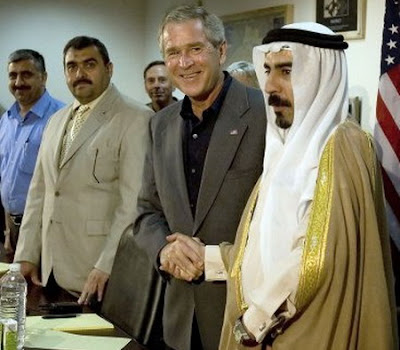 Shimmy & Surge: The Iraq Withdrawal Sham
Don't you just wish you had your own personal PR team who could turn your worst foibles into triumphs and transmigrate your poorer qualities into behaviors worthy of emulation? Much as you may abhor the amazing hypocrisy of the Grasping Old Party and deride its delusional denizens, you've got to hand it to them for abilities which rival Rumplestiltzkin's. Now that I think about it, they are indeed Rumpelstiltzkinesque, routinely spinning random, disastrous crap into gold, and when they're contradicted you half-expect them to throw a dwarvish tantrum and stamp their feet through the floor. When it comes to words, they are to euphemism what Albert Einstein was to the atomic bomb, they are to spin what Chubby Checker was to The Twist.

Take "The Surge," for example. Surge. The word must have been carefully chosen from amongst many candidates by psy-op marketeers to best stroke the impulses of aggressive optimism. Heaven forfend it should be called a reinforcement or escalation. Amidst the barrage of recent Senate hearings, presidential addresses, and news articles largely extolling the virtues of its effects and the genius of its design, let's knife through to tendon and sinew, and get a couple of facts straight. What was the operational plan? What did it accomplish?

Originally planned as an all-out summer campaign focused exclusively on classical counterinsurgency (COIN) techniques, the Surge's main intent was to strengthen the Iraqi government's control. Obviously, the troop build-up in Baghdad and its western trouble spots (such as Anbar Province) has manifestly failed to meet that overall goal. By official admission, the government of Iraq is weaker than it was six months ago, and there have been open calls for the ouster of its elected leaders. Now, the escalation is set to last until next summer, while being called both a success and a withdrawal. The preznit said last night, "The more successful our troops are, the sooner they can come home." Yeah, and the beatings will continue until morale improves. Where are the Brothers Grimm when you need them? I don't recall a fairy tale about The Bullshit Artist.

It would be unjust to dismiss the improved planning behind the build-up, and it seems that General David Petraeus is a pretty good strategist. While failing in its large hope, the escalation seems to have had a couple of effects, each of which may be good, particularly depending upon how you look at them. First, the ethnic cleansing required to partition sections of Iraq behind "blood borders," i.e., borders often defined by features of terrain and legitimized by the consent of conflict, common ethnicity or beliefs, seems to have been hastened. Second, weapons, ground support, and air strike assistance were given to the tribal militias in Anbar who opposed Al-Qaeda in Iraq (AQI). In other words, tribal enmity towards external Saudi influence was finally put to use, and the intelligence and goodwill the militias were able to deliver hurt AQI enough so that politicians could find the nearest camera and declare the province pacified, the Surge a success. In fact, the province was so pacified Preznit Bush just visited it, to personally see the progress.

See the guy in the picture above, shaking preznit's hand? His name is Abdul Sattar abu Reesha, and he was a tribal sheikh who led anti-AQI operations in Anbar Province. He was killed yesterday, just before Bush was going to talk about him in a presidential address. The Anbar Province is far from pacified, and most of its people will not shun the influence and assistance of fellow Sunnis in Saudi Arabia because both are necessary for the long-term survival prospects of what we might now start calling Sunnistan.

As for withdrawal, the 2,500 troops Petraeus and Bush said are coming home in December were scheduled to rotate back anyway. For the troops said to be coming back next summer, the Surge was supposed to already be over, and a lot can happen before next year. It might be helpful to remember that the British occupation of Iraq in 1919 lasted for nearly 40 years, and they were announcing withdrawal all the way. Via Jonathon Glancey's article in the Guardian on April 19th, 2003:

In his memoir of the crushing of the 1920 Iraqi uprising, Lieutenant-General Sir Aylmer L Haldane, quotes his own orders for the punishment of any Iraqi found in possession of weapons "with the utmost severity": "The village where he resides will be destroyed _ pressure will be brought on the inhabitants by cutting off water power the area being cleared of the necessaries of life". He added the warning: "Burning a village properly takes a long time, an hour or more according to size".

This General Sir A Haldane you mentioned. . . he seems like a good time chap to have around in any given war situation. Take an hour to burn the Village down? uummm please don't tell Bush.

I think he just meant the houses. Elsewhere he spoke of only killing a third of the inhabitants, and how it was desireable to attack a remote, completely innocent, and defenseless village to better demonstrate the all-ranging powers of retaliation.

If it only takes an hour to properly burn a village, shouldn't we have been out of there years ago? I mean, are they disguising the villages as hamlets, or what?

Besides, I have a hard time believing that we'd just burn the village without looting it first, and that would certainly take more than an hour. You'd have to find an internet cafe, and list all the stuff on Baghdad Craigslist, etc.

Baghdad, Craigslist, and 360 tons of hundred dollar bills that were flown in. Hmmm.