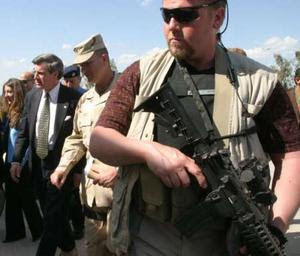 Diplomatic Travel Suspended In Iraq
While providing security for a diplomatic convoy, guards employed by solider of fortune firm Blackwater USA killed 8 unlucky civilians and wounded 13 after an improvised explosive device went off in the road. It's understandable, totally. Some people turn the adrenaline faucet on 'HOT' when a balloon pops, and I bet if every commuter on America's byways were armed with machine guns, there might be Trouble. In my mind's eye, I see soccer moms cutting through inconvenient traffic with the aid of tommy guns.

Soldiers get scared when something explodes near them without warning. Their endocrine systems instantly go pedal-to-the-metal, they get angry, and they start shooting, in this case while assigned to protect a high-value target. This was yet another unfortunate incident among hundreds if not thousands which occurred in the netherworld of war. If you wish to, you can find videos of guards riddling Iraqi cars with automatic weapons for sport, laughing hysterically when their drivers crash. That's not a recommendation to search for them. It's just the truth.

This time, puzzling as a pig eating a popsicle, the Interior Ministry said it was revoking Blackwater's license to operate in Iraq.

First of all, security firms like Blackwater and their employees have successfully asserted in US courts that they were operating under the auspices of the Provisional Authority of Iraq and were not subject to prosecution for fraud, murder, or anything else. To them, Iraq has been a free-fire zone. Second, while it may be possible in the market-driven Best of All Possible Worlds, I doubt Blackwater ever went to the democratically elected government of Iraq and paid for a license, or were asked to get one. The US embassy in the Green Zone refused to answer questions of legal status, saying it was seeking clarification. Blackwater USA doesn't recognize the government of Iraq, they recognize who pays them, in this case the people doling out our tax dollars and pumping out greenbacks.

So when the US goverment in Iraq calls a halt to diplomatic ground travel in the wake of the latest Blackwater incident, it's as if they're suddenly taking the Interior Ministry seriously. Not the effect you would predict. There's more here than meets the eye. Events in Iraq may be moving faster than we think. At the very least, Blackwater may have to quickly re-incorporate so it doesn't have to extract 12,000 mercs from where it's making its fortune.
Posted by MarcLord at 5:03 PM

Private armies must be the go. Wonder what it costs? I might get me one, really stand the neighborhood on its head.

Wonder if I should get an officer's uniform, look like I'm a General. Yeah, in Walmart I'd make a mark. No more waiting at checkouts!

If I recall correctly, the salary is $150k per year and all the plastic-wrapped stacks of $100 bills you can stuff into an SUV.