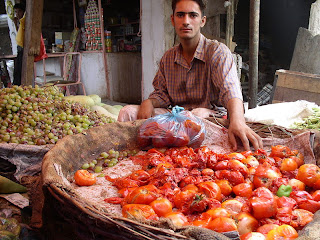 Al-Sadr Withdraws Support For Iraq's Government
This is the death knell for the nation formerly known as Iraq. Its elected leader, Nouri al-Maliki, just lost his bread-and-butter domestic support, and Moqtada al-Sadr's 32 political representatives won't be attending parliament sessions anymore, or consulting with Dawa, Fadhila, or Supreme Iraqi Islamic Council, the parties which made up the Shiite voting bloc. The Fadhila Party pulled out in March of this year, reducing the Shia parliament majority to 115 out of 275 seats.

Previous readings of the tea leaves on this blog indicated this shoe was going to drop, as Maliki obviously has one too many masters and wasn't giving Sadr his due. The most populous section of Baghdad is called Sadr City, after all, and to his millions of followers, Sadr is nothing less than a messianic figure. Perhaps more importantly, Sadr City has Iraq's only effective police force and militia, along with the best medical, welfare, and food distribution systems. (The picture above is of a Sadr resident selling vegetables.)

While Maliki is said to retain a razor-thin majority, it's difficult to see how he can keep the government from formally dissolving or simply falling apart due to lack of interest. When that happens, Sadr City will be the anchor of what is seen as a new Shiite country emerging after tri-partition, known in policy circles as the "Shia Rump" of Iraq. One hopes a less anatomical name may be found before the event occurs.

You have to wonder how much, or if, a de facto partition accelerates the case for a bombing campaign on Iran. Sadr is a religious nationalist who wants peaceful co-existence with Iran, but complete independence. Still, there's a common border and religion, and while it might not be immediate, you'd assume Sadristan would soon be tightly allied with, and eventually folded into, Iran. Arabic nations counted as US allies in the region dread the prospect, and are probably giving a green light to "taking out" Iran's nuclear capability. As if it were only that simple.

Many observers, seemingly utopian Bush apologists, have for some time been preparing a meme like a shuffle of zombies: "the real goal of the invasion was partition." This doesn't square well, however, with the mechanics of oil extraction. One government is easier to control than three, at least two of which will want to hold oil workers and guards for ransom, torture them, blow them up, puncture their pipelines, or seize and re-sell their oil.
Posted by MarcLord at 3:10 PM