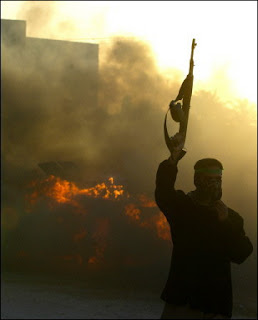 Stealing History: Moqtada Al-Sadr, Jesus, & The Eschaton
The world is full of power and energy and a person can go far by observing, skimming off tiny slivers. We use rivers. And history almost repeats because we were here before, but not quite.

Example: It has become fashionable to say that Jesus is not a historical figure, that he is a construct who never existed as a person, that his particulars corresponded conveniently to the Zodiac, the duration of his mission was archetypal, his miracles mythic, his resurrection recycled. The key cross-armed assumption is that such an important personage would've been faithfully feted and meticulously recorded, that the records of Eusebius and Josephus, amongst others, were posthumously augmented by clumsy bishops. All that may be. What such analyses assiduously ignore, and I find far more interesting, are the environments that begged for a Jesus and the ones like them before. In other words, the environments which gave rise to Gods. The Zodiac may be right, and gods may be Wankel engines, their courses adhering to the confines of one well-greased eternal round. But every God is different from before.

Israel was an uncomfortable part of Rome. Jerusalem wish-wanted a revolutionary to throw off the yoke of foreign oppression, Jerusalem longed for The Mighty, and there must have been many, many other Christs, all lost to history, who were extinguished and executed in painful, anonymous deaths. Jesus may be a myth, the myth may be a vestige, an acid-wash composite, yet it remains. As for me...I suspect Jesus was an actual man, an Essene who traveled to the east, sampled Buddhism, and returned with a radically dissident philosophy which resonated with his time. He was the ultimate passive aggressor who accepted his fate.

There is a Jesus figure in Iraq today. He is similarly easy to dismiss because of his comic aspects, his youth, rumored homosexuality, hermeticism, and otherness. Despite these facts, Moqtada Al-Sadr will be the authority of Shia Iraq. (Paradoxically, he is a strongly moderate influence.) He will provide leadership and welfare as the British depart from the South, his fervent followers believe in him, will die for him, and he will be the power behind a new government. As the singer/songwriter Dan Bern would say:

Probably, no press story you've ever read has explained what Shiites are. They are this: as Jesus said, the meek shall inherit the earth. That's how Shiites see themselves. They are the abused, the disinherited faithful. Of course the idea of the return of the Mahdi and a 12th Imam is a superstitious travesty, as is Christianity, but the followers believe. They genuinely believe that the 12th Imam will come to the world, bring Jesus with him, and establish peace on earth. After ordering fries with that and establishing justice, naturally. Does this sound familiar? Didn't think so. Pass the ketchup.

I've watched this guy's moves for a while. They are very, very good. Minimum of effort, studying the lilies. Solomon clad as one of these. He's not interested in fighting US or Coalition forces. He's simply waiting for them to go away, and knows what his people want. He doesn't command. He leads. Somewhere he is looking at a hundred dollar bill right now and saying, "Give unto Franklin, that which is Franklin's." And if a new Pontius Pilate is so stupid as to kill him, he will be a martyr without equal in the last two thousand years.

In this case, Dr. Nussbaum was wrong.

Maybe, but I hear he's taking new patients and we should give him a call.