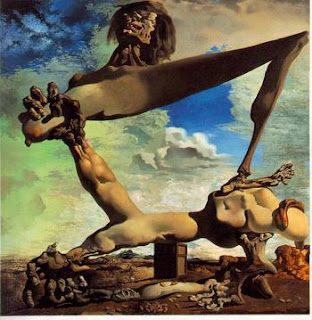 A Letter From Paulson Estates

The tools to understand what's happening to America lie not in the details of CDOs, CDSs, SIVs, LBOs, MBSes or MMMFs. They're heated and forged in history, context, metaphor. Having predicted 7 years ago in another scurrilous September, these fallouts we're witnessing, knowing this time they wouldn't be content until they'd taken everything, I'm still the fool.

Hank Paulson was involved in Watergate; he was John Erlichman's assistant, Erlichman who went to jail for setting up "the Plumbers," the internal witch hunt in the White House, and hotel break-ins. For any youngsters who wander in here, the codes you just heard means Comrade Treasury Secretary Paulson wants to finish America off and turn it into something else, say, "Paulson Estates." He appeared with all the talking heads on Sunday, then came before our cold comfort Congress to sow hysteria and demand the full wealth of Golconda, else the wrath of financial Jupiters will rain down. There has been silence, and a deeper silence, while the Senators hesitate.


There is no law which says when a mortgage lives to 3 years old, a borrower's payment has to triple. That's a contract, not a law. Foreclosure is a choice. $100 billion to bridge the gap between non-performing home loans and the value of financial derivatives would have held up the whole house of cards, but it couldn't be done, because the Law of Personal Responsibility would be violated. (Yet a mortgage moratorium was done here in 1933 to keep people in their houses and farms.) There are links, opinions, and facts galore, but history, context, and metaphor tell me what should be done is what will not be done. In a parallel universe where Ralph Naders dwell, here is what should be:

I'm the fool. I still want them to take the world and hold it against the light which shines on Delphi, watch its cellophanes weave and play like color slides, suspend the orb in their marble abytum and set a gentle ear to the hive inside. I want them to pause on their ascendancy, roll pebbles idly down the mountain and meditate on each one's fall. Oh, how I wish they could skim across the surfaces of these earthly shelves and feel the tensile calculi, looking down with smiling faces, apprehending the artifacts of what once were nations, waving at us toiling on the shore.

But all they want is to chain the world to a wall, where they can torture out its full confession. It's reached the stage of urgency, you see, where full therapies must be applied, and nothing less will do. They've done with mere beatings and are bringing the electrodes. We'll say the words they want, oh yes, say them like we mean them. One day, when this has passed, we really will mean them, and we'll agree it was for our own good.

(Note: the painting above is Salvador Dali's "Soft Construction with Beans, Premonition of Civil War," painted in 1936.)
Posted by MarcLord at 2:07 PM

Even Bush calls the economy "a house of cards." See for yourself at about 2:30 into the video.

The correct metaphor, one I almost ran with, is a card game. It's one in which the members of a club can leverage the money they take inside, and gamble for 100 times more than what they brought.

What a great juxtaposition of image and subject matter. And the words are magnificent.

Thank you for your kindness; was just musing on possible outcomes. In a way, I almost wish Sarah Palin becomes president. We need the disgust, anger, and resolve which would follow.

PS, thanks for the Chris Hedges catch.

I strongly encourage you to call your 'representatives' in Washington to OPPOSE the currently-proposed Bush/Paulson "bailout".

While there surely would be some positive effect of any credit infusion,this is yet another example of The Bush Administration using exaggeration and fear to railroad the Congress (and thus the public) into hasty action favorable to his agenda (buddies in Financial Services Industry). Although there surely are problems, the timing of this, right before the election (and a(nother) Congress 'recess' (for re-election) ) ... is blatantly manipulative.

Anything that is passed semi-soon should AT LEAST INCLUDE these:

0) carefully thought out, not "by Friday"

2) The USGovt (ie. taxpayers) should only be lending money (extending credit) to obtain preferred stock , and NOT to be actually buying said toxic [derivative] securities, which are difficult to evaluate. That process should be left to the private sector "experts", analysts who will decide what price they (or their employers) would pay -- which sadly but necessarily will be low-ish -- those low prices are why you & me shouldn't be buying them for medium prices, as Paulson/Bush would have us do.

3) Bi-partisan oversight of loans(purchases), by a group that represents various expert sources, not just ex-Wall$treet insiders such as Paulson (ex-CEO of Goldman)

OPTIONAL:
a) Smallish short-term tax credits for those who buy the toxic derivatives
b) Moderate loan/tax help for those who lose their too-big house, to help them start anew in a more moderate dwelling.
c) Federal Law requiring methods of compensation in publicly traded corparations (and non-profits), to mainly be salaries, thus restricting stockOptionsm, bonuses, parachutes to a modest fraction (1/4) of total compensation, higher some if the person had a decent # of years in the organization.

I also note that for Paulson/Bernacke to submit a mere 2 1/2 page proposal on this, was lazy, insulting and amateurish.

thanks, was going for that feel because more dry specs and stats don't convey the horror. This week represents the end point of "entrepreneurial government:" that is to say, takeover.

Great seeing you here, and the Elzenbeck Proposal is more coherent and careful than anything else I've yet seen.

One more point: the regular stock and bond markets are still working fine. The markets which are caving in, which aren't working at all, are all ones that aren't regulated.