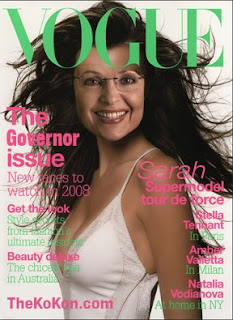 Sarah Palin's News Roundup
Believe it or not, I've been arguing for days with various smart folk that the Republican VP choice on McCain's behalf was brilliant. A gamble, sure, but a bold one which shows a real grasp of the country. First off, it was far better than McCain's top picks, ending his ongoing, agonized personal debate between the Toady Party's Joe Lieberman and the Desperate Housewives show's Nicolette Sheridan. Having only met Sarah Palin once, big-on-blondes McCain didn't remember her name and after repeated promptings, got impatient and said, "Whatever! Hey, I'm just the candidate--if Karl Rove says I'll run with a flock of flamingos, what choice do I have?"

Really, though, Rove & Co. outdid themselves on this one. Ha-ha-ha, change? You want change?? Palin is a Fundie who sports an impressive resume for the 80% of America which reads nothing except free People, Us, and tabloid periodicals you find at beauty parlors, dentist offices, church foyers and oil change franchises. She is perfect for the 95% of America that thinks 'Foreign Affairs' refers to the upcoming Boris and Natasha movie starring the "Beef, It's What's for Dinner" spokesman Matthew McConaughey and Kate Hudson (who recently broke up with Lance Armstrong!).

Palin, a former Alaska runner-up for the Miss America Pageant who married her high-school sweetheart, has also been a sports anchor, a small-town mayor, has 5 children, is a no-rapes-barred pro-lifer, and before being governor of the Toughest State in the Union for the past two years, was Alaska's Oil and Gas Commissioner. She catches salmon, is a former secessionist, wants creationism taught in schools, shoots caribou, hunted bear as a child, she commands the Alaskan National Guard, and was once on a jet that re-fueled in Ireland. People keep telling me how these are bad things, and I reply, "Don't you get it?! This is nothing less than a breakthrough in American Politics. It's like we're primates picking at grubs and the monolith from the movie 2001 appears above us and says, 'Finally--the Trailer Park President has arrived!!'"

Seriously, check your rationality at the door, it doesn't belong inside the US ballot box. Rove & Co has their psychographic act down and the lurps are on the case. Exhibit #227 in How Not to Think About America: Steny Hoyer, US House Majority Wet Noodle, last Friday called Palin "a worse choice for VP than Dan Quayle." Precisely, Steny my shell-shocked glossolalia victim, precisely. Quayle, back in those distant, beatific days of Acadia, was famous only for his ingratiating dumbness and cheerful blondeness, and if I remember correctly, he became George Bush Senior's Vice President after they won the god-damned election together, Steny you good-for-nothing Congress-bastard! (Calm, soothing thoughts, breezes, pretty butterflies landing on flowers.) So...what kind of sick elitist allows themselves to go around being called "Steny," anyway?

Now the Republicans have an improved, supercharged version of Dan Quayle. In fact, to the evangelicals, Palin makes Dan Quayle look like Dustin Hoffman when he played 'Rainman.' As America's first VPILF, she did not disappoint, delivering her acceptance speech, "I Will Break America's Glass Ceiling With These Award-Winning Breasts" to thunderous applause while McCain (I am not kidding) approved of her nether regions. She has dominated the media play ever since, even fueling wild speculations she covered for her daughter Bristol by claiming her illegitimate Down's Syndrome baby as her own. Jesus, you just can't make this stuff up.

Yeah, she has a few scandals going and is insane in that special way that's so common among people who long for Armageddon. But she gave a speech in Texas (back in April, when she was already being considered as the VP pick) apparently with amniotic fluid leaking down her leg, then she hopped a 10-hour flight to Alaska so her commercial fisherman husband could drive her to their little home-town hospital and she could have a baby. That might have been incredibly dumb, but far more importantly it was tough. The Fundies aren't disturbed by a pregnant teenager here, a fired ex-brother-in-law there. C'mon. They identify with that shit, and they will reach for their unmaxed credit cards to give money to the McCain campaign when their preachers tell them to.

Let's face it: Sarah Palin is someone right wing evangelicals, the biggest political force in American history, can get behind. And that's not even getting into her possible resonance with women. It'll be very interesting to see how the scandals play out, but the ones on the table right now probably don't shake core appeal. (And since when have scandals prevented most Republicans from getting elected?) Presidential politics are emotional politics, and whichever way you slice it, naming a Fundie as VP reinvigorates The Base--something a McCain, a Romney, a Lieberman, a Pawlenty could never do. I predict that the next McCain announcement will be that they've raised more donations than in any month before.

(Update Shocker: The atheists who run Us magazine came out with a hard-hitting cover that's on the stands now, themed 'Babies, Lies, & Scandal.' The word you're looking for Mitt Romney, is schadenfreude. Watch for it on your next supermarket trip, with bonus reportage on other shocking teen pregnancies.)

(Update Shocker 2: The NYT is reporting his team couldn't move Oldfinger off his Lieberman Fixation until just 2 weeks ago. Infighting would explain the story's theme of incomplete vetting, making it more likely Palin hoodwinked 'em on something big. Here's hopin'!)

The Dems never learned from John Danforth Quayle. He was a brilliant pick 'cuz papa Bush was bleeding toward the finish line, carrying the cross of iran/contra, october surprise, etc.

What Quayle brought to the ticket was a "weak link." Everyone attacked because he was so easy. Cocaine bust (this was b4 crystal meth), but he was probably down with Haggard.

But no one votes for or against the vice president. and all the politicos biovating over Palin and a near comatose McCain don't realize that deep down, every American secretly believes that nest year American medicine is going to be able to prolong life indefinitely. So who cares that McCain has a metal rod up his ass, shooting sparks to his brain. Next year they will fix it!!!

Palin is a fascist-wing decoy who thinks they want her for her mind. They may not be planning to know her biblically, but they will use her all the same. She is an appendage, not a link. Dems need to turn their sites on the Wizard, not the pretty face.

Luckily, Obama is pretty smart. And I have the feeling he is running his own campaign. So there is some hope left.

My god. Is that her? I only listen to radio, which failed to convey the other dimensions you have revealed of this cover-girl. Over here, I think the informed opinion would be that such a choice shows contempt for the electorate.

Contempt for the electorate--yes, yes, now you're catching on! That's how it works here! Personally I would have preferred Vanessa Williams, the former Miss America who is totally smokin' hot, but only because Angelina Jolie doesn't clear the age requirement.

Obama running his own campaign is not a positive, because he falls back into acting rationally far too often, even assuming others are rational and using things like reality to make a point. When you're explainin', son, you're losin.'

Obama's best when he sticks to the mythical narrative, i.e.,
his amazing rise from a Kenyan goatherd who survived on pepperoni sticks to become America's first president.

Have just watched the local SBS feed of Lehrer's "NewsHour" with two of the speeches at the Republican convention. Oooer - Jeez, McCain is the eternal sufferer, it seems; but the most powerful endorsement came from a Democrat (Liebermann?). Am just guessing at this point .. but methinks "America First (and fuck the rest of the world)" may well be (and remain) foremost on the cards for this round, at least.

[PS, no, haven't read your post in detail, just adding some info from this side of the equator .. heh.]

I share your cynicism about American's visceral (lack of) intelligence; but this Palin is just too good a choice handed over to Democrats.

In today's world, when Paris Hilton has become 'intelligent', and the Hollywood is all leftish, it is not hip for the People-magazine readers to support Palin or the demented Johny!

Whatever. But the question remains. How can a singular "most powerful" manage the concepts inherent within the interests of the world polulation?

and yer, from my point of view at this point of time. The Untied States of America are probably one the most demented. Zimbabwe is seriously into "Ve Vill prevail" .. heh heh.

Palin is a People magazine battleground choice for the Pugs. She's square inside their base, the base which has cried about big government on the one hand and screamed for the most "pork" on the other. She is the poster girl for what's ruining the country, and maybe enough people will see thru her, maybe not.

this must look pretty strange from your side of the world! Thanks for keeping track.

Marc--
Profmarcus and I were discussing this on our radio show this morning. Tin-foil hats aside, we were wondering whether the Repugs already have the machinery and game plan installed to steal another election.

Why else would they be so reckless? They are 'preachin to da choir' with tunnel-vision on their dwindling base. The Republican wing of the Neocon movement are many things, stupid is not one of them.

The show this morning really brought the nutcases out of the woodwork, which for us, is unusual. I've come to believe that most people who vote Repug have some severely stunted mental capacities in both concrete, and abstract thinking; not to mention cognitive reasoning abilities. *sigh*

Redneckism and fundamentalism value brief and simple. Preaching to that choir is their best move, very well-calculated. Even if they lose the overall election, pandering to the base shores up their positions across all the other congressional elections. There is no better get-out-the-vote organization for them than the evangelicals, even if it turns the presidential election into a down and dirty shit-kickers' referendum.