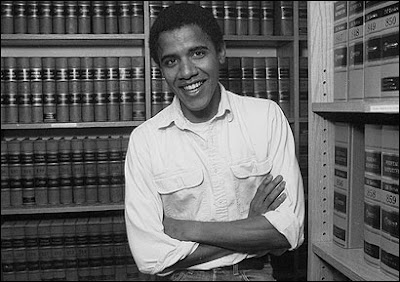 We Don't Need More Heat In Washington, We Need More Light
The best peacemakers can hit the hardest when they need to. Barack Obama was elected as editor of the Harvard Law Review in 1990, the first and only black to win that post. He was a second-year student with a second-hand wardrobe living in a basement apartment in Somerville who wanted to go back to community activism on Chicago's south side. Every other Harvard Law Review editor over the past 30 years went on to clerk for a Supreme Court justice, become a corporate counsel, or work for an investment bank. His Law Review victory was ground-breaking, more significant than later becoming a Senator.

Obama is remembered as an even-handed peacemaker who routinely kicked both liberal and conservative ass upwards to better things in the vicious, petty agenda-debates common to law schools. "A lot of people at the time were just talking past each other, very committed to their opinions, their point of view, and not particularly interested in what other people had to say," said classmate Crystal Nix Hines. "Barack transcended that."

Obama rocked the Dims hard with straight, sharp jabs in Iowa, six days before its primary.

On the Clintons:
"The real gamble, the risk, the real risk in this election is playing the same Washington game with the same players and expecting a different result. (Two weeks ago Bill Clinton warned a national TV audience that Obama would be a "roll of the dice," offering Hillary as a Sure Thing.)

On Edwards:
"Some people say, 'Well, Obama talks a good game, but he's not angry enough, he's too conciliatory.' I don't need lectures about how to bring about change because I've spent my life bringing about change. I turned down the big jobs to do community organizing in Chicago. I turned down the big money law firms to be a civil rights lawyer. I took on the lobbyists in the state legislature in Illinois."

On The United States:
"We don't need more heat in Washington. We need more light."

Quote of the day comes from Clinton, Iowa

"We've been conducing a colossal experiment for the last six years to see if it matters very much if the guy in the White House isn't that smart."

"And, the results are in.

Hehe, colossal is the word for it...thanks for amusing and enlightening!