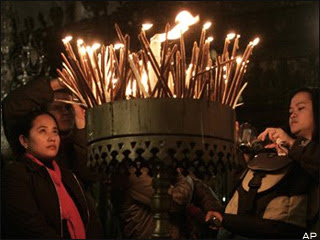 Christmas Cheer Returns To Bethlehem
Even if it's hokey, it's still cool. I get all verklemmt when people stop shooting each other, for even a little bit:

West Bank (AP) - Hundreds of Christian pilgrims celebrated Jesus' birth on Tuesday in the West Bank town where he was born, in an atmosphere made markedly cheerier by the renewal of Israeli-Palestinian peace talks after years of bloody conflict.

By midday, the ancient Church of the Nativity was packed with tourists waiting in line to see the grotto that marks the traditional birthplace of Jesus.

The visit to Bethlehem was a first for Kiel Tilley, 23, a science teacher from Charlevoix, Mich.

"It's very powerful and meaningful to me," Tilley said. "It's very moving to visit a place which I always read about in the Bible."

The relaunch of Israeli-Palestinian peace talks at a U.S.-sponsored conference last month reassured him before his trip, he said.

"I'm always in fear something would happen," Tilley said. "But the peace process made me feel safer."

Hundreds of people from all over the world crowded the church's dark interior. Some stopped to look at part of the original floor about two feet below the current one, exposed in a fenced-off section in the middle of the church.

Some of the tourists inside the church wore Santa hats, and one carried the national flag of Indonesia, a country whose population of 235 million is nearly 95 percent Muslim.

The church, first built in the 4th century, looks like a fortress. Two rows of columns line each side of the long, narrow central hall.

According to Israeli border police, who monitored the entry of visitors into Bethlehem, 22,000 tourists had crossed over by midday, including about 7,000 Israeli Arabs.