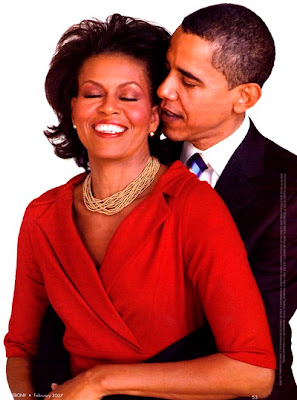 Obama Speaks English Again
There's a lot of pressure on candidates to avoid risk, to talk tough, to elide and not say what they mean. Barack Obama was roundly press-crucified for saying that he wouldn't nuke Iran, naive as that notion may be. He retreated into cautious inanities for a couple of months, and his poll numbers dropped. Meanwhile Hillary Clinton, in effect, voted for legislation that gives the current Occupiers the go-ahead to attack Iran in connection to prestidigitations into Iraq. This gave Obama an opening to definitively call BS on Her Clintonessa. His passion and intellect pulse for real, and he's still one of us. Hillary has passed far beyond us, on into the frozen lands of fairy maidens.

While there would be a foreign policy pragmatism gain if Hillary gets elected, there won't be any substantive change in the Empire's stance with regards to the Mid-East, or war footing, or energy policy. Better to give money to Obama, Chris Dodd, or Ron Paul. They want to change the equation in a fundamental way and stop the Dracula Strategy. Hillary's on board the Status Quo like a jump-suited Pro-Ho in a purple pimp-mobile. An improvement on sheer idiocy, sure, but she's been anointed with unholy oils and is up for a crude awakening. Obama's lighting her up again, which is Real Good. Read his statements in bold below and please tell me if they don't make sense:

DES MOINES, Iowa - Democrat Barack Obama has stepped up criticism of front-runner Hillary Rodham Clinton, sending Iowans a mailing noting that he opposed a measure that critics warn could lead to war with Iran and was supported by Clinton.

"Barack Obama opposed another Bush foreign policy fiasco," said the mailing, being sent to thousands of homes on Tuesday.

At issue is a measure in the Senate which declared Iran's Revolutionary Guard a terrorist organization, which Obama called "conventional" while campaigning in New Hampshire.

"What I've insisted is, we have to completely rethink foreign policy and diplomacy. ... We have to talk not just to our friends but also to our enemies. That includes Iran. That includes Syria," Obama said at a house party in Merrimack, N.H.

Clinton voted in favor of the Senate measure. She defended her vote over the weekend, saying she did so only after language which could be interpreted as an authorization of the use of force was removed.

Responding to the mailing, Clinton spokesman Mark Daley said: "If Senator Obama really thinks this is an issue of war and peace, it's odd that he didn't speak out against the measure before it passed or show up to vote against it. That's not the kind of strength and leadership Iowans are looking for."

The dispute goes to a fundamental disagreement between Obama and Clinton.

Obama routinely criticizes Clinton for voting in favor of authorizing the use of force in Iraq, a move he opposed even though he had yet to be elected to the Senate. He says that shows he has "judgment we can trust," while Clinton's judgment is flawed despite her experience in Washington.

Clinton has said only she would not have voted to authorize the use of force if she knew at the time what she now knows. She blames flawed intelligence.

In New Hampshire, Obama said the debate is representative of the campaign's larger differences.

"We have very good candidates on the Democratic side," he said. "The question, though, is whether you are going to nominate a candidate who is not just tinkering around the edges or can bring about real change."