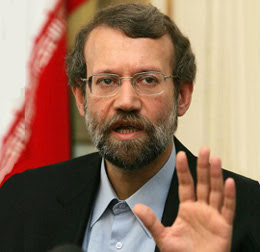 Iran Facts Update: Earth Moves Under Thy Feet
Update: Talks in Rome held, and successful too, According to Solana.
In this picture, he is shaking hands with the resigned negotiator, Dr. Larijani. Iranians showed a united front, and willingness to negotiate peaceful solution.

More than 180 Iranian MPs have signed a letter praising former chief nuclear negotiator Ali Larijani, who has resigned from his post.

The deputy speaker of Iran's parliament has said that Mr Larijani resigned because he could no longer work with Mr. Ahmadinejad, confirming suspicions that they had fallen out on policy, and possibly personality as well.

This means Ahmadinejad's in trouble!
This indicates that if Ahmadinejad deviates from the expressed wishes of the supreme leadership and the parliament, he will be in constitutional trouble! That, Larijani attended the Rome talks as representative of the supreme leader is already alluding to to exposed rift between Iran's ruling factions. However, it seems that the so called "islamo-fascist-dictatorship" in Iran is acting more responsibly and more democratically than that of the US of A!

Mr Velayati, the former war-time foreign minister- now senior foreign policy adviser to Supreme Leader Ayatollah Khamenei has expressed objection to Ahmadinejad accepting Larijani's resignation: "In the very important and sensitive situation where the nuclear issue is at the moment it would be better if this [resignation] did not happen, or at least it was prevented".

According to Velayati (read the voice of supreme leader on foreign matters) pragmatists believe in negotiating with the international community and talk of following the path of Japan.

It would be becoming worrisome however, if Ahmadinejad takes a radical stance against the supreme leader. He has been showing Komeini-ist megalomaniac symptoms, and he has been capitalizing on the capitalist corruption of those who are opposing him at this moment. Khomeini's radicalism has done great harm to Iran. I doubt this rookie is afraid to fall in the same Neo-Con trap that his spiritual leader fell, 30 years ago!

(Editor's Opinion: Ahmadinejad seems to be losing control of his "Base." Like in the US, the clerics in Iran hold the minority position, but the most concentrated power. Except in Iran, they will act functionally, meet, and deal. Khameini is the dealer, and by comparison to our crazies, he's taking a "first do no harm" approach. Larijani resigned in order to free himself from A-jad, and he's still very much in the negotiating driver's seat as evidenced in Rome. Iran's end game? It wants nuclear power so it can generate electricity and doesn't have to burn or export so much oil. It's reserves are wildly overstated, and its oil fields are in collapse. The objective is NOT to nuke Israel, screeching harpies notwithstanding. The contract for providing nuclear power generation is now at play between Russia, the US, and France. Thanks to Naj at Iran Facts for the high-quality local insight.)
Posted by MarcLord at 4:03 PM

I don't know where i said this, but the way power politics in iran are contradicting themselves is very amusing:

We have a decidedly confrontational and elected civilian president.

Iranians have been trying to get rid of the leader figure for 30 years now (they overthrew the shah only to be faced with a supreme leader replacing him!)

Now, the crazy president and the unliked leader are at odds with each other. And they both will depend on the people to weigh their support behind them.

Their united front, and their willingness to negotiate peaceful resolution is a demonstration of the people's will. We have a saying: fishing from murky waters! Internally the fight between leadership and president's office benefits the people!
Internationally, it send a message that: "look we have two camps, which one do you want to engage? the pacifist or the confrontational?" and so this "theater" of resignation is pushing the ball in America's court!

So in a way, the government is accommodating the Iranians, but it is leaving the next cruicial move to the US and the neo-conservative cabal!! And in this manner, they also buy themselves international respect!

I trust your insight into these matters, and am glad for your analyses. It is very hard to get solid intel on Iran.