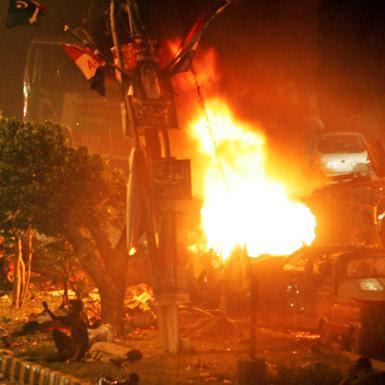 Hidden Histories & The Bombing Of Benazhir Bhutto
[Caught in sensual music all neglect the monuments of unaging intellect. At night old friends and such as me ate sushi in a Boomtown restaurant. At one point we discussed the assassination attempt on Benazhir Bhutto.]

What a terrible thing, hundreds of people blown apart. How big that bomb must've been.

Terrible for us, too.

It's so because as you know we caused atomic bombs to be given to ul-Haq, the general who killed Bhutto's father in '79. Who went to Berkeley, by the way.

First, we didn't trust India and still don't. The Bomb was quid pro quo for setting the biggest CIA station ever up in Islamabad. The Saudi Foreign Legion loaded donkeys with weapons, the donkeys climbed with Stinger missiles through the Wazir passes. Russian boys same age as me back then were riding around in trucks so they could get ambushed. The missiles messed up the helicopters, shot down some generals. The soldiers and half Russia got messed up on smack. With the Bomb, the CIA and Foggy Bottom raised alarms and tried to stop it but they got trumped and stifled by the same guys who run this Tom Clancy shit right now.

C'mon, you're talking crazy we would never have done no such thing. Give the bomb away to a bunch of Islamic fascists? No way.

Weren't you just foretelling how thin the world's thread is hanging and how the stock market's life should be feared? Whatever. Believe what they tell you Sunday morning. Pakistan has the nukes, it's got the people who'll use them. The means to deliver them. Probably the same people who tried to off Bhutto's daughter. Musharraf is so desperate to keep the lid on that he's bringing her in to form a coalition. The whole thing depends on a few people staying alive. Kinda like the country formerly known as Yugoslavia, but with nukes.

Stop it, you're cheering us up. Maybe you should go on Meet the Press! Talking like you're some kind of expert.

Yeah right. Monuments to our magnificence. They press the meat so flat we can receive wisdom like pizzas. Sing, baby, sing. Well maybe the truth can't compete with the Kabuki. But when the spin is spun and forgotten the truth stays in the ground like veins of gold. They stay put, can't get rid of 'em. They're right there waiting on forensics like CSI. Even after a thousand years someone like Ed Gibbon comes along, digs 'em up and sings out to Byzantium. He was way into the Roman Empire because he was thinking so hard about his own.

So you're saying Pakistan's going to go up?

Yep. Not saying they'll nuke somebody for sure, but maybe. If it happens, it'll escalate. And all this Iran shit is just a scarecrow. They want to bomb the only stable thing on the whole damned yellow brick road. Crazy mother#&*%ers. That axis of evil they kept pushing, it's stuck smack dab into Pakistan. Strapped onto us like a suicide bomb. Hey, I hear they're making a movie about Afghanistan called Charlie Wilson's War. Tom Hanks is in it. He's doing fantastic stuff now.

Yeah. I loved Band of Brothers. Let's drink to that. To Bands of Brothers, and to America!

"A Song of MarcLord", well done.

Those ISI guys in the Pak military have always supported the Pashtuns in the Afghanistan/Waziristan. The US can keep a lid on Egypt and Indonesia but these guys are the reason they cannot keep a lid on Pakistan.

The US has brought in Bhutto to provide cover for the war they're going to launch in the Wazis.

Yea, it's going to blow. I'm thinking it'll shake out to China/Pakistan vs. US/India - which is probably what the US wants anyway. India is equivocating but this might roll them over. We are already fighting China in Sudan, Myanmar and Tibet. Maybe this is Bush's WWIII. Things are definitely shaking under the table - Putin to Iran and that whole Syrian/Turkey/PKK/Armenian genocide routine - what's that all about?

Charlie's War is a great book.

I finally got around to "Blood and Oil" by Michael T. Klare. A quick, easy read which clearly and simply explains what you already know.

Never read Charlie's War. A friend alerted me to it, should get around to reading. Did read Klare's B&O. It's nice when somebody with a disciplined mind gives a tight structure and great depth to what's going on in your gut, and it's a roadmap to understand almost every geopoli-twitch.

I agree in the main with your possible outcomes, unfortunately. China is not a good adversary to have. They've got positional advantage which just about guarantees strategic victory. Their plan is opportunistic defense. A US Bankruptcy is the GOOD outcome. Chinese is such a hard language to learn.

The possibles are too dark to delve into regularly on the blog, and as you see I try to mix things up. Indulging in speculation would be fun, but...well Pakistan's not speculation. Here's hoping for a lucky break, cuz statecraft can't save it at this juncture. As if we possessed such a thing.

Interesting you mention the Armenian genocide thing. I didn't connect it to pressure on Syria or a bone to the PKK. Just wrote it down to more congressional idiocy, and don't see obvious carrot-sticks. But you may well be onto something there...the timing is just too exact. Not to mention the irony.

I don't know about Pakistanis ever using their nukes. The state will not. Would there be enough nuclear savvy islamo-zealots to do it? Well that I don't know.

These people have been killing eachother for years!

One reason for Iran being the stable country of that region is because our "dictators" have been very effective in LIMITING the British's divide and conquer designs.

But Pakistan is worrisom, no doubt about that.

While the Pashtun majority seems secure, the ethnic divisions in Pakistan do indeed remind me of those in Yugoslavia. There's little doubt that Pakistan is on the brink. Of what is a good question.

The question of Pakistan employing nukes depends on a couple of factors. First, to what extent extremists have infiltrated the military. Second, if there is sufficient opportunity, i.e., a good target. My guess is their ideal target would be a fleet offshore.

As for proliferating nukes, the ISI has already done so. There is, of course, an argument that proliferation brings about a better balance of power, one that's practically needed and theoretically true. But again, set those nukes down into a Yugoslavian scenario, and then I'm not so sure. Very unsure and frightened, in fact. They demolished Dubrovnik, after all, and only lunatics would've done that.

Here's an interesting interview with a witness close to the Pakistan bombing:
http://www.madison.com/tct/news/index.php?ntid=252646


I don't share her optimism for the future, but I hope she's right.

I sure hope she's right, too. Certainly people with her kind of bravery make the chances better. (Doff of my hat.)