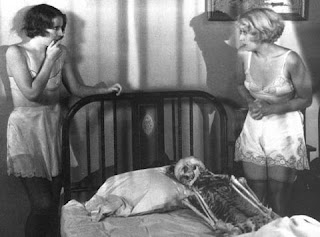 Insurance Industry Set To Reap Bonanza
Given the curious advantage, one rather akin to time travel, of writing the health care reform legislation before it even gets inspected by the elected Congressional representatives who vote on it, what's going to happen is hardly a surprise. But it is a disappointment, especially for people like me and my wife and at times like this we are quite capable of sounding like anti-government Republicans. Because we share their opinion of a process gone horribly, irrevocably wrong.

We're both self-employed, you see, and our combined insurance premiums and out-of-pocket health care costs total up to more than $20,000 per year. In fact we still owe nearly $4,000 for our second son's no-complication, no-epidural birth, which took only two hours of delivery room time.

Like Obama, we were naively hoping for a little competition to be injected somewhere into the insurance "industry" processes, so a claim can't be denied retroactively six months down the line with no explanation, so the yearly premiums don't go up by an arbitrary 8, 13, 11, or 15%. Couple that cost into our boxcar of $27,000 per year in child care expenses (note: we chose two of the better day care values available in our neck of Seattle) and an 8% higher tax straight off the top for the temerity of having a small business (known as the "self-employment tax"), and it adds up to one dream sail boat or Porsche worth of cash per year. Something has got to give, and it will almost certainly be us.

To the insurance companies, combine 40-some million uninsured folks with the right wording and it's Bring On the Dancing Nurses for a long, long time. There's an article in the LA Times detailing the mechanics of how a "strong public option" will fleece taxpayers and subscribers who don't meet at-need limits:

Lashed by liberals and threatened with more government regulation, the insurance industry nevertheless rallied its lobbying and grass-roots resources so successfully in the early stages of the healthcare overhaul deliberations that it is poised to reap a financial windfall.

The half-dozen leading overhaul proposals circulating in Congress would require all citizens to have health insurance, which would guarantee insurers tens of millions of new customers -- many of whom would get government subsidies to help pay the companies' premiums.

"It's a bonanza," said Robert Laszewski, a health insurance executive for 20 years who now tracks reform legislation as president of the consulting firm Health Policy and Strategy Associates Inc.

Some insurance company leaders continue to profess concern about the unpredictable course of President Obama's massive healthcare initiative, and they vigorously oppose elements of his agenda. But Laszewski said the industry's reaction to early negotiations boiled down to a single word: "Hallelujah!"

The insurers' success so far can be explained in part by their lobbying efforts in the nation's capital and the districts of key lawmakers.

The bills vary in the degree to which they would empower government to be a competitor and a regulator of private insurance. But analysts said that based on the way things stand now, insurers would come out ahead.

"The insurers are going to do quite well," said Linda Blumberg, a health policy analyst at the nonpartisan Urban Institute, a Washington think tank. "They are going to have this very stable pool, they're going to have people getting subsidies to help them buy coverage and . . . they will be paid the full costs of the benefits that they provide -- plus their administrative costs."

One of the Democratic proposals that most concerns insurers is the creation of a "public option" insurance plan. The industry launched a campaign on Capitol Hill against it, grounded in a study published by the Lewin Group, a health policy consulting firm that is owned by UnitedHealth Group. The lobbyists contended that a government-run plan, which would have favorable tax and regulatory treatment, would undermine private insurers.

Opposition increased this month when boisterous critics mobilized at town hall meetings held by members of Congress home for the August recess.

The attacks, supplemented by conservative critics on talk radio and other forums, drew national attention.

Leading insurers, including UnitedHealth, urged their employees around the country to speak out. Company "advocacy hot line" operations and sample letters and statements were made available to an army of insurance industry employees in nearly every congressional district.

Leading Democrats have fought back, with House Speaker Nancy Pelosi (D-San Francisco) last month calling the industry "immoral" for its past treatment of customers and suggesting insurers were "the villains" in the healthcare debate.

Still, recent support for the public option has declined, and the stock prices of health insurance firms have been rising.

Undermining support for the public option wasn't the only gain scored by insurance lobbyists.

In May, the Senate Finance Committee discussed requiring that insurers reimburse at least 76% of policyholders' medical costs under their most affordable plans. Now the committee is considering setting that rate as low as 65%, meaning insurers would be required to cover just about two-thirds of patients' healthcare bills. According to a committee aide, the change was being considered so that companies could hold down premiums for the policies.

Most group health plans cover 80% to 90% or more of a policyholder's medical bills, according to a report by the Congressional Research Service. Industry officials urged that the government set the floor lower so insurers could provide flexible, more affordable plans.

"It is vital that individuals, families and small-business owners have the flexibility to choose an affordable coverage option that best meets their needs," said Robert Zirkelbach, spokesman for America's Health Insurance Plans, the industry's Washington-based lobbying shop.

Consumer advocates argue that a lower government minimum might quickly become the industry standard, placing a greater financial burden on patients and their families.

"These are a bad deal for consumers," said J. Robert Hunter, a former Texas insurance commissioner who works with the Consumer Federation of America.

"It would be quite a windfall," said Wendell Potter, a former executive at Cigna insurance company who has become an industry whistle-blower.

In the first half of 2009, the health service and HMO sector spent nearly $35 million lobbying Congress, the White House and federal healthcare offices, according to data from the Center for Responsive Politics.

With more than 900 lobbyists, that sector -- whose top spenders are insurance giants UnitedHealth, Blue Cross Blue Shield and Aetna -- was poised to spend more than in 2008, a record lobbying year.

UnitedHealth spent the most, $2.5 million in the first half of 2009, and hired some of Washington's most prominent political players, including Tom Daschle, the former Senate majority leader who served as an informal health policy advisor to Obama.

"They have beaten us six ways to Sunday," said Gerald Shea of the AFL-CIO. "Any time we want to make a small change to provide cost relief, they find a way to make it more profitable."

At this point, the alternative is to do nothing, and get eaten alive even more anyway. At least with some kind of legislation in place, the door to better amendments to that legislation, buried on page 892 of the 1,500 page defense budget bill, squashed right between new BlackHawks and BlackOps. It's a starting point, which this country has never had. I have to support any effort to shake up the system.

Curious concepts. Difficult for me, now. There was a time when I owned a boat. Ocean-going. Survival. Insurance? Nah, ain't none. What we are talking about is "wagers". What's the bet that this ship will survive the journey. Calculate the odds.

There is a vast disconnect between those who "do" .. and those who "bet on the odds".

..and, um, well .. spent my money on actual real life anchors and stuff; couldn't see much sense in spending much on imaginary "terror".