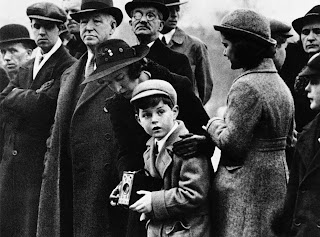 Edward Kennedy, 1932-2009
While on a largely internet-free vacation we got some weekend TV coverage of Senator Teddy Kennedy's passing. Much can be said in sport and criticism of the man, and was, but he had a huge heart that did much good. In the photo above he was 6 years old, in front of Buckingham Palace with his sister Jean as his father Joseph, America's new and rather unsympathetic ambassador to England, called on its King. While not tailored for the grandee, Edward would turn out to be exceedingly comfortable with back rooms and bars and also in the details where deals are made before they ever see the light of day or stage. He had the rare ability to be loved by friend and foe alike.

Another flawed character, the son-of-a-gun-can-write Joe Klein, crafts an appropriate eulogy to the Senator whom he knew professionally for almost 40 years, The Man Who Found Himself:

He seemed a ghost the day I met him. It was Memorial Day, 1970. He was dressed in a black suit, white shirt, black tie. He was still wearing a back brace from the Chappaquiddick accident and he moved stiffly, like a robot cartoon of a politician. He didn't smile, seemed grim even when shaking hands with the civilians; his demeanor was all the more striking because we were at a classic grip-and-grin event, the annual Greek picnic in Lowell, Mass. All sorts of politicians were there, including two who would run for President themselves — Michael Dukakis and Paul Tsongas. The pols gadded about with antic smiles and jackets hooked over their shoulders, ties loosened, sleeves rolled up, trying to look like Kennedys, trying to look ... like him. His family defined political style and vigor for a generation of politicians. But at that moment, and for years after, Ted Kennedy seem to writhe in the public eye.

He was scared catatonic, of course. Scared of death, obviously. There was no reason to believe, in a nation of nutballs, that he would be allowed to continue, unshot. But he was frightened of more profound things as well — overwhelmed by his own humanity in the face of his brothers' immortality, convinced that he'd never measure up, that Joe and Jack and Bobby had been the best of the Kennedys. He was the baby; his political career — the premature ascension to the Senate at the age of 30 — was a family conceit, the closest thing to a regency appointment the Senate had ever seen. He was not only the baby, but also the screwup — cheating on his Spanish test in college, boozing and womanizing well beyond the requisite Kennedy-legacy level, and then Chappaquiddick — and even after Chappaquiddick, after he had somehow allowed a young woman to die, they still wanted him to run for President. There was no way to convince them that he was a hollow shell of the dream.

The piece is worth reading in full, and there's a gorgeous archival collection of the lens-worthy Kennedy Family suitable for mulling a passed era at the Big Picture.
Posted by MarcLord at 7:56 PM

Good dispatch and this fill someone in on helped me alot in my college assignement. Gratefulness you seeking your information.