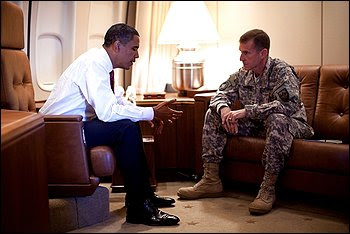 A Bright Shining Showdown
Give the picture above a close look; it's the first time the President of the US and the commander of his ground forces in Afghanistan met 1-1. Today is the Year Eight of the war they're conferring over, and their body language is telling. Obama's posture is patient, explanatory, verging on remonstrative; Stanley McChrystal's is taut, defensive, and tilting to one side. The general looks like he might be struggling to maintain his composure while thinking, "I could spatter his head like a bug."

Obama's intellectual training was primarily by Socratic method, which emphasizes dialectical questions designed to get one party in a debate to tellingly contradict themselves, strengthening the inquirer's point. I have been very critical of the President for asking for a report he knew would, in a word, suck. In his defense, maybe he didn't know it would suck this badly, and didn't expect it to collapse so easily upon an amateur's inquiries. For example, BHO may have asked self-contradicting questions like these:

"Are you telling me that 40,000 more troops are enough to decisively defeat the Taliban in Afghanistan, once and for all?"

"How will these new troops limit al-Qaeda's continuing growth in Pakistan, where we know it's becoming a deadlier domestic and international threat?"

Stanley A. McChrystal is a Crusader, a third-gen Military Industrial Complex product deeply in the pocket of the NeoCons, and Fred Kagan, who authored the bribe-the-Sunni-insurgents-and-leave plan known as The Surge in Iraq, is his strategy advisor. He has gone on 60 minutes to tout his plan. He has given a speech to an international crowd in London. His allies, one would hope not his own office, leaked his classified troop request report to the press. His disdain for Obama, his commander-in-chief, is visible, quotable, and wholly insubordinate. Obama is likely too smart to fire him, and McChrystal is probably too dumb to resign. I suspect McC's superior, Gen. David Petraeus, has masterfully set up a good soldier to take a fall for him.

When it comes to making war or anything else, Fred Kagan and the NeoCons are turds in a picnic cooler. One must assume the questions, simple questions above were put to their report, and no good answers were blurted. Obama today announced, as expected, that there will be no withdrawal. That sounds bland and depressing enough, but he also set no timeline on a decision for escalation, no numbers on additional troops at all. In other words, it is the omission which speaks loudest, and he's breaking the news to the NeoCons softly. Refer again to the body language in the picture above.

In D.C. Newspeak, Obama's announcement today signifies No Buildup. There may be a token compromise (a.k.a. Operation Kevlar Chandelier), but bottom line, this is an infuriating hog-tying for the NeoCons and their Generals, and they're off in basements and bars this evening uttering vile oaths, making pacts and desperately sharpening knives. Having been brilliantly stalemated, the best they can do is cry, "leisurely," and "too deliberate!" For once since his election, I stand in admiration and applaud: Barack Hussein Obama didn't give them the satisfaction of a clear "No."
Posted by MarcLord at 12:43 PM

Brilliant match of text and illustration.

I think you're reading too much into it. I think an officer of McChrystal's rank is perpetually taut.

The recent Newsweek article on the General was positive; he seems to understand counter insurgency. One of his first orders - obey local speed limits - show he understands the need to avoid appearing like conquerors. If we can make some portion (obviously not all) of Afghanistan fairly safe for a limited amount of time to allow the local government to establish whatever corrupt order they can, we can then withdraw. We broke it, we elected the ADHD Bush who ignored it, we need to at least try to leave them in some semblance of order.

On the other hand, I was horrified to learn that McChrystal was the army's point man in the Pat Tillman coverup and exploitation. Yes, he was being directed by the traitors in the White House, and a good soldier follows orders. But I would like him to come clean about that national disgrace before I trust him with more troops.

i learn today that McChrystal has been described as a "notorious psychopath" by James Petras.

In his May 17 article titled "Obama's Animal Farm: Bigger, Bloodier Wars Equal Peace and Justice," James Petras called him a "notorious psychopath" in describing him this way:

His rise through the ranks was "marked by his central role in directing special operations teams engaged in extrajudicial assassinations, systematic torture, bombing of civilian communities and search and destroy missions. He is the very embodiment of the brutality and gore that accompanies military-driven empire building."

i don't think Obama is learning him anything. i think maybe Obama is going to meet the bus soon and mcchrystal's body language might be interpreted as "i can't believe i have to sit here and listen to this asshole"