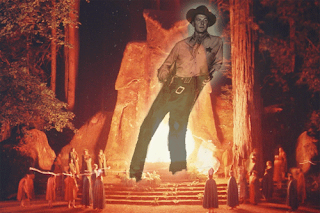 The Permanent Republican Majority's Specter
Senator Arlen Specter's staff denied queries today that he was turning coats to become a Democrat, denied again, and then confirmed. Politically, the impact will be huge.

Keeping tabs on Specter is not a task which fills my heart with joy, so I don't know when his re-election bid rolls around but would give 3:1 odds it's soon. He is the Senate's 12th most senior member and one of its most powerful. He has chaired the Intel and the Judiciary Committees, as well as Veteran's Affairs. He is one of the people who sit around and decide where the grease goes, and how much of it.

He has lymphoma, just undergoing chemo to control it again last year, so maybe he simply craves having some political relevance again. (See Obama's tactic of making deals to peel off moderates and isolate radicals, two posts previous.) Given Specter's stature, it wouldn't be surprising if this marks the start of a trend.
Posted by MarcLord at 4:33 PM

Jolly likes to point out that Specter was key to a lot of funding going to the NIH. I'm lukewarm about Specter. I can't quite get past the "magic bullet."

(shrug) But that's just me. Whattyagonnado.

yeah, the 'single bullet theory' is mentioned in his wikipedia post. He got his reward and then some.

Specter is possibly one of the slimiest, most self-interested toadies in the Senate. He's no prize but he knows where the bodies are buried alive.


Against this background, Mrs Hillary Clinton surfaced in Iraq, ostensibly to hold a 'Town Meeting', but in reality to conduct banking transactions. These will have concerned either the stealing or the repatriation of Bush-Clinton stolen or diverted funds stashed at the Central Bank of Iraq, which are urgently needed to enable President Obama to meet his obligations. The total information famine on Tuesday suggested that this operation, and the implications for Mrs Clinton's future, were up in the air: but we understood on Tuesday evening that Mrs Clinton's position was highly precarious.

• It is speculated in some circles that the sudden switch by Arlen Specter to the Democrats may have something to do with the resolution of these matters, and may not be solely connected with his concern about not being re-elected if he remained with the Republicans.

Given the pill-popping Rush Limbaugh's propensity for making fun of people with devastating illnesses (e.g. Michael J. Fox), I expect to see Rush doing an impersonation of Specter undergoing chemotherapy. Oh the hilarity!

I know nothing about any of that but do know the lengths human ingenuity will go to steal money. Iraq would be the ideal place to park it undocumented-like.

do you Limbaugh at all?