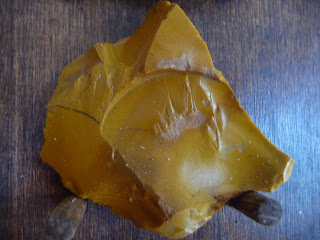 Mousterian Age Industry & HandyMan Tool
Speculative pre-historic Question of the Month: how did they clip their nails?

Last month in the spirit of not having any right whatsoever to do so, I figured out (to my satisfaction, at least) why Neanderthals went extinct. I promised to attach a pic of a prized jasper tool which hangs above my fireplace "soon."

Apart from being a distinctive, compact and versatile tool which can be used as a cutter, scraper, and borer depending on which side is applied, and from having a shape perfect for receiving a thumb, what compelled me about this artifact was that it was made of beautiful, unweathered jasper. Jasper was coveted in the ancient world for jewelry and tools, and whoever made this unique could and did make more.

You are looking at a sharp flake of great prestige, which also was a basis of stone-age trade although this three-in-one was, one suspects, kept off the market as a personal effect. It was flaked by what looks like a semi-Levallois technique but isn't anything like the turtle-shaped circles of the Acheulian Era 100,000 years ago, nor is it nearly as thin or as specialized as the Chatelperronian flint flakes which started to appear 32,000 years ago. However old, it is a masterpiece, even sui generis and will still cut flesh.

It is from Fontmaure one of Europe's most famous Neanderthal sites near a modern-day farm and this hue of jasper tools has only been found there. The Neanderthals at Fontmaure lived above-ground, village-dwellers, and most tools from there are smaller than my HandyMan, as if the jasper was rationed to milk as many tools out of each precious core as efficiently as possible. Other objects found there are made of sandstone, flint and light gray quartz.

The light gray quartz artifacts originated from a site one hundred kilometers away, clear evidence of trade. I don't know how many above-ground Neanderthal sites exist, but there surely aren't many, and remains of both humans and animals have been excavated in Fontmaure's strata. Interestingly, limestone balls were found of a sort still used by natives in South America as a throwing weapon to tangle around legs, as well as triangular mine-pyramids perhaps used for decoration or ritual.

The HandyMan hangs directly over where I keep my Leatherman toolset. They are companions beneath a pastel blue piece of the Berlin Wall. Maybe someday I'll acquire this Fontmaure left-handed jasper handaxe. I hope they didn't use that one for fingernails.
Posted by MarcLord at 4:07 PM

What I love about your site, Marc, is that I usually learn some new and interesting little bits of knowledge when I visit :)

Is there a story behind the Berlin Wall fragment?

I was there when it fell.

Man you never saw a whole country walking around with a smile on its face. Everybody smiling and there's nothing funnier than Germans trying to high-five each other.

But a good friend of mine and blogger got it for me.

I bet that was indeed a sight to see! I watched the wall come down on tv :)