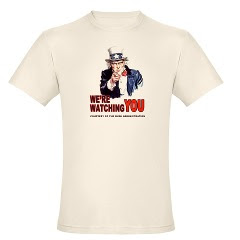 The Need To Roll Back Presidential Power Grabs, by Arlen Specter
The tachometer swings, momentum builds. Senator Arlen Specter released the above-titled article in that respected journal of congressional politics, The New York Times Review of Books. Admittedly, it's full of juicy disclosures, and was published just as he was switching parties. Short-short: Specter fingers Dick Cheney as being responsible for using the telecoms to spy on "tens of millions" of Americans and for sabotaging previous legislative efforts to restore the Foreign Intelligence Services Act (FISA) and the rule of law. Nothing we didn't know, but any Pug who said that two short years ago would've soon been found with a Dead Girl and a Live Boy.

Coupled with the recent leak of the existence of NSA eavesdropping transcripts on conversations Rep. Jane Harman had with unnamed Israeli lobbyists, a.k.a. spies, a move clearly meant to threaten Harman, and you've a pretty good indication Cheney has active stay-behinds in the apparatus. If so, he can still use past and possibly present surveillance to put the fear of exposure into politicians and bureaucrats on both sides of the aisle. In Harman's case, she's a Dim who sits on the Intelligence Committee and has visited Israel 22 times in the past few years. She's vulnerable as hell, and all Cheney had to do was note the mere existence of transcripts to back her down.

(Note: since the transcript is about the Israel Lobby promising to get Harman put on the Intelligence Committee after the 2006 elections in exchange for keeping a couple of their red-handed own out of jail, there are different, more hopeful interpretations for the source of the leak. However, the leak was a naked demonstration of power, and Harman is now the most vocal defender of the Bush Administration's use of surveillance. Gonzales had previously quashed congressional exposure of the surveillance and protected Harman, by then an indictable criminal. Now, as threatening legislation looms, boom! The embarrassing leak. Cui bono? Veep Throat. My money's on Cheney as source.)

Evidently the NSA and "Veep Throat" have nothing on Specter. If they do, we'll hear about it soon. There were huge problems with the 2006 version of his same basic bill, including executive ability to order ISPs to hand over all communications without going in front of a judge. Still, they're playing in a different stadium now. To name but a few examples, the Pravda, I mean Washington Post, stated this week only 21% of Americans now identify themselves as Republican, House minority leader John Boehner actually used the word "torture," and a civil war is being fought in the former goose-stepping-in-unison RNC.

If he gets the anti-surveillance, anti-signing statement legislation through as described, I'll take back (most of) the bad things I've said about the Senator from Pennslovania:

In the seven and a half years since September 11, the United States has witnessed one of the greatest expansions of executive authority in its history, at the expense of the constitutionally mandated separation of powers. President Obama, as only the third sitting senator to be elected president in American history, and the first since John F. Kennedy, may be more likely to respect the separation of powers than President Bush was. But rather than put my faith in any president to restrain the executive branch, I intend to take several concrete steps, which I hope the new president will support.

First, I intend to introduce legislation that will mandate Supreme Court review of lower court decisions in suits brought by the ACLU and others that challenge the constitutionality of the warrantless wiretapping program authorized by President Bush after September 11. While the Supreme Court generally exercises discretion on whether it will review a case, there are precedents for Congress to direct Supreme Court review on constitutional issues—including the statutes forbidding flag burning and requiring Congress to abide by federal employment laws—and I will follow those.

Second, I will reintroduce legislation to keep the courts open to suits filed against several major telephone companies that allegedly facilitated the Bush administration's warrantless wiretapping program. Although Congress granted immunity to the telephone companies in July 2008, this issue may yet be successfully revisited since the courts have not yet ruled on the legality of the immunity provision. My legislation would substitute the government as defendant in place of the telephone companies. This would allow the cases to go forward, with the government footing the bill for any damages awarded.

Further, I will reintroduce my legislation from 2006 and 2007 (the "Presidential Signing Statements Act") to prohibit courts from relying on, or deferring to, presidential signing statements when determining the meaning of any Act of Congress. These statements, sometimes issued when the president signs a bill into law, have too often been used to undermine congressional intent. Earlier versions of my legislation went nowhere because of the obvious impossibility of obtaining two-thirds majorities in each house to override an expected veto by President Bush. Nevertheless, in the new Congress, my legislation has a better chance of mustering a majority vote and being signed into law by President Obama.

To understand why these steps are so important, one must appreciate an imbalance in our "checks and balances" that has become increasingly evident in recent years. I witnessed firsthand, during many of the battles over administration policy since September 11, how difficult it can be for Congress and the courts to rally their members against an overzealous executive.

Numerous war powers statutes remain at legal loggerheads with citizens' rights in a time when the definition of war itself has been widened and loop-holed. At least this bill opens the way for ACLU lawsuits to engage the courts for definition. Arlen Specter...I've had stranger bedfellows, but none I care to disclose at this time. The rest here.