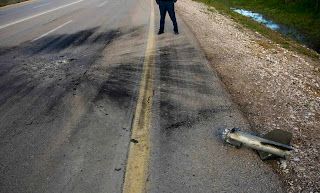 Palestine, Gaza, And Long Shadows
In modern times it's hard to unpack all the info-maelstroms, it's easy to get snagged by electronic histrionics. They strobe-blind and strand us from seeing our natural backgrounds of time, connection and depth. The Media excel at casting, destroying, discovering, and re-casting Molochs of irrationality, erecting false yet powerful narrative arcs which demand our mental fealties. The falsities control us on the cheap, leaving collateral damages of knowledge, context, and common sense.

Israel's invasion of Gaza, for example, is utterly devoid of a context which should be completely obvious, even to Westerners, and some will soon be provided below. First, it's wise to admit my approach to thinking about politics and conflict was already unorthodox by inclination, and was kicked even further towards a "long shadows" framework by once being horribly, frighteningly wrong.

In Yugoslavia in the 1980s, I failed to see a devolution into chaos and genocide as it was happening right in front of my eyes. I cheerfully walked and stayed in places where little old women and pre-schoolers would die by sniper fire for hurrying groceries across a street, where pits would be dug to dispose of massacres, where a war against civilians (focused on Islamic Bosniaks) would soon ensue. The war consisted of ethnic cleansing, siege, mass rape, execution and torture, where it was lucky to starve in concentration camps. Rather than predict reality, however, I reported future prospects in line with official perceptions, and pronounced the area ripe for Western expansion.

All the calling cards of chaos were there for me to see: the empty shelves, rationing, black markets, Soviet-style surveillance, sharp ethnic and religious divisions, the eroding commons, growing inequities and casual police corruption. Rather than think for myself, I chose to believe what an optimistic media told me. Here's the kicker: even if my ignorance of the area's history had been corrected, I would still have denied, and vehemently, that an imminent war of atrocity would be caused by conflicts which took place more than 400 years earlier.

There's nothing like knowing that even if you'd done the homework, you still would've failed the exam. The lesson of not being equal to that test has never left me. It has urged me to be more clinical in appraisal, more mindful of past echoes, to scrutinize first-hand observations over distant theories. It forever shook my faith in the blithe premises of unchaperoned diversity, and taught me that context, however complex, is reality's keystone.

Now, then: let's go back to Israel, Palestine, and Gaza. All the way back to Zephaniah chapter 2, verse 5:

For Gaza shall be forsaken, and Ashkelon a desolation: they shall drive out Ashdod at the noon day, and Ekron shall be rooted up.

Woe unto the inhabitants of the sea coast, the nation of the Cherethites! the word of the LORD is against you; O Canaan, the land of the Philistines, I will even destroy thee, that there shall be no inhabitant.

The scripture above was written circa 630 B.C. by one of the most obscure prophets of the Old Testament. "Philistines" is a Hebrew term derived from the root p-l-sh, or פלש‎, which means to invade, divide, or overwhelm. Referring to that same people, the Romans used the word to rename Israel as "Palestina," a final insult to the Jews after their million-corpse rebellion was put down late in Hadrian's reign, 135 A.D. As for the Philistines, no one knows where they came from originally. The available evidence indicates they were ethnically distinct Caucasian refugees or prisoners, (likely from one of the Aegean islands, maybe Mycenae) sent by an Egyptian pharaoh to the southwest coast of Palestine some 14 centuries ago. They were a sea people, remarkably skilled mariners, iron-smiths, and merchants.

At that time, and until its name was changed to Judeah post-Exodus, "Canaan" was the name for all the lands east of the River Jordan to the sea, which had been a province of Egypt dating to 2000 B.C. Beautiful purple fabrics, prized above all others, were made in Canaan with dyes coaxed from an indigenous murex snail. The dye was called Knaa, and the Phoenicians (Greek for "purple people") became famous for shipping the fabric all over the known world from Jaffa (Haifa). It signified royalty.

Many peoples existed in the land other than Philistines and Judeans, most of which are even more lost to history than the Hittites. The Old Testament remains the only document to list the tribes and clans apparently displaced following the Exodus (see Genesis 10: 15-19). Today's Palestinians and Israelis are the survivors of those ancient disputes, in which one can imagine a violent churning of migrations, innovations, and assimilations. The southwest coast of Canaan which the Philistines first seized is now known as the Gaza Strip.

Gaza ("strong point") was named for the most formidable of its five city-states, and the Philistines gained their pejorative stature after gaining them by Egyptian mandate. They became wealthy, built up and pushed further out into Hebrew-held lands. And so it came to pass that the Hebrews developed a special hatred for the Philistines--and they must by no means have been alone in reviling the strange and powerful usurpers of choice coast-line. In the Bible, conflict between them seems to be a constant, and several hundred Old Testament scriptures are devoted to heaping scorn on Philistines over and above the other unwanted occupants of Canaan. The stories of Samson and Delilah, Saul, Samuel, and David all feature Philistines as villains, and when David slew Goliath to become King of Judah, he slew one of their champions.

To a contemporary Israeli with even a cursory knowledge of tradition, Palestinians are synonymous with Philistines, the Gazans most of all, and ancient Canaan is geographically synonymous with the outer borders of modern Israel. As a policy, revenge and cleansing of them and the other cattle-people ("goyim") are deeply embedded in Israeli tradition, and more. It's repeatedly spelled out in sacred text as the will and commandment of god. as it is in Deuteronomy 7, verse 1:

Fast forward to last November, stop, and note: it's handy to keep deep background in mind while you debate whether to fire up your Bullshit Detector. Our media now tells us that Gaza's Hamas Party broke a cease-fire with Israel, easy enough to believe. But rewind two years, stop. Hamas won a democratic election held in 2006 at the behest of the Bush Administration. The US, Canada, and the EU froze Palestinian government accounts and withheld all payments. Israel then blockaded the Gaza Strip, where 2.5 million people are crammed into a hundred square kilometers, and the industrial output and trade promptly shrank by 95%. The only food Gazans get is from humanitarian aid, and Israel supplies the electricity (not!). All manner of subterfuge, spy-craft, and force have been applied to throw Hamas out, and have failed.

Israel broke the cease-fire on November 4th, 2008 when its forces killed a Palestinian in Gaza. Some people there responded with a single mortar barrage towards Israeli positions, no casualties. Israel then killed six Gazans, to which Hamas responded with its "advanced" Qassam rockets. This fits the pattern. 79% of Israel-Palestine conflict pauses were interrupted when a Palestinian was killed. 8% of pauses were interrupted by Palestinian attacks, with the remainder unclear because 13% were interrupted by both sides on the same date. Of the 25 periods of nonviolence lasting longer than a week, Israel broke 24, or 96%. Israel attacked and killed Palestinians every time after 14 periods of nonviolence lasting longer than 9 days (data source: Israeli Consulate, New York).

The picture above is of a Qassam rocket impact on a road. It didn't even leave a pot-hole. Rewind 2638 years, Deuteronomy 7, verses 2-3, stop:

And when the LORD thy God shall deliver them before thee; thou shalt smite them, and utterly destroy them; thou shalt make no covenant with them, nor show mercy unto them:

Neither shalt thou make marriages with them; thy daughter thou shalt not give unto his son, nor his daughter shalt thou take unto thy son.

The shadows are long and often ugly, but the sun also rises on the naked and the dead. On Jew and on Muslim. Israel has finally lost a PR battle for narrative arc in the West, as we have seen the pictures and video unravel on the InterNews. When the next Gazan school is bombed, the next family lies in a house entombed, Hamas will gain strength. It's not enough for Israel to stop now, the ship embarked and is cruising for a distant boycott. To survive another 20 or 30 years, Israelis have to pull their heads out from where they are so deeply stuck: from the dream of a Zion that never was, and from the Bible's ass.

Yes, they do. But I don't think they can. They just can't let it go.

No, of course they won't, as close to determinism as you can get. They'd rather get carried off into slavery.

Can't you have this published somewhere like in the Guardian?!

Marc, thank you for this post - truth be told, i knew nearly none of the numbers you cited above. I am somewhat embarrassed to admit that I knew the biblical portions.

Israel is heading down a dangerous path in its dealings with Hamas, particularly with keeping out journalists and firing on relief trucks to keep out the humanitarian aid.

They must really think the world is stupid, because Olmert and whatshisname keep going on about the "hamas terrorists." Maybe they are, and maybe they aren't. But frankly, the Israel government is starting to look like the terrorist to me.

thanks! but a good editor would probably rip it to shreds.

wow, you should be embarrassed for knowing that much Bible. ;-) Pretty obscure stuff. I had nothing better to do than to read it for a couple years.

if only we goys could have such flair!

I have often felt that Life had me by the throat; I was free before my time with a Gag shoved down my throat...I was born in time of no problems with a secure future. No one sorted it out for me' Maybe Little Richard, all righty! There was no choir, no Angelic sound to say I was o.k. The rafters shook, it was all Babel to me!! Nothing was secure....

one actually needs to read thru the old testament to understand what sort of vitriol the IDF rabbis are infusing into the IDF soldiers, and then one can understand - to a degree- why these thugs can march into gaza and gun down Palestinian kids, and shoot Palestinian women with white phosphorous ordnance.

Who is the terrorist here? Israel killed about 700 women and children of the 1400 total killed in Gaza recently.

Ask yourselves, what if Iran or Syria did such a thing?

I knew I will find something on the topic that is raging today; you already had said it all. Perhaps you should just automatically republish this every three years, with a script to modify dates accordingly!