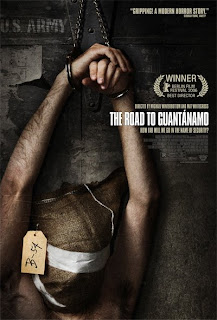 The Associated Press has learned that President Barack Obama plans to sign an executive order Thursday to close the detention center within a year and halt military trials of terror suspects held there. The executive order was one of three expected imminently on how to interrogate and prosecute al-Qaida, Taliban or other foreign fighters believed to threaten the United States.

A senior Obama aide said the president would sign the order on Thursday, fulfilling his campaign promise to shut down a facility that critics around the world say violates domestic and international detainee rights. The aide spoke on condition of anonymity because the event has not yet been announced.

(Update) Some in the blogsphere are displeased Gitmo didn't get closed right away, but at least the war crimes trials were suspended today. The real problem is figuring out what to do with the inmates, with legal complexities ranging from merely bewildering to impossible. For example, one Canadian is accused of killing a US sergeant with a grenade in Afghanistan 7 years ago. The accused was 15 at the time. Can he really be tried in a US civilian court? As an adult? What justice could a "jury of peers" dispense? Would love to hear any case precedents for that one. Probably best to send him back to Toronto and let them figure it out.

Regardless of guilt, the US would be wise to offer each of the inmates $250,000 or more in exchange for agreement not to sue for damages arising from torture and wrongful imprisonment. Then give them a plane ride home. Many Americans would argue that doing so would let a lot of guilty people go, including Kaleid Sheik Mohammed (who would like nothing better than execution) and five other alleged 9/11 plotters. Too bad, game over.

America lost when it tortured these men, and torture invalidated both their confessions and their guilt. To put that in perspective, most anyone who comes through here, including myself, would confess to being a Sylvania light bulb, 60 watts, after about 20 seconds of waterboarding a.k.a. drowning. I've drowned a.k.a. died, it's not pretty, and these people went through far, far more than that.

For over 7 years, they were in a place scientifically designed to elicit human misery, their keepers inclined to extract revenge. Not surprisingly, the few sane ones left recently tried to starve themselves to death, as a final protest, and feeding tubes denied the privilege. If we let these people go without agreement or closure, guilty or innocent, imagine the flight paths their grievances will take. There are crimes to be punished here, oh yes. And the orders to torture may well prove to be the instruments of it coming to that.

Don't forget the yearbook and class ring. They're probably already planning their reunion over at classmates.com.

LOL, I can see it now. "Hey Abu, do you remember that female guard with the sexy underwear? I was only acting defiled so she'd do it more."

It's a pretty select group there, and they will learn about the organizational advantages of Web 2.0.