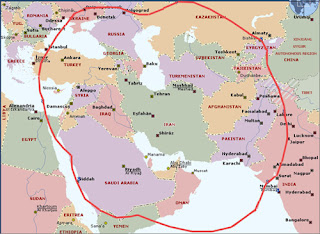 Smells Like Dead Congress
Quite a week for our country. There's good news and bad news. Allow me to start off with the good news: fascism is not all bad, and in the right situations, particularly during war, it can govern very efficiently. Plus, we've finally completed the "Fascism for Dummies" checklist (Note: shamelessly borrowed from Naomi Wolf.):

The bad news? Umm, the madhouse is in full skelter. As a poet in another empire once said, "Traveling down the measured Thames/ every passing signpost shows/ so many marks of weakness/ so many marks of woe." Our government is become like teeming masses of undead, claw-wielding things inside exoskeletons living at the bottom of silty rivers, waiting to feed upon the carrion of fresh parricides, obeying what the discordant, binary-limited hemispheres of congenitally diseased brain signals.

This week, the Occupier-in-Chief excoriated countries for not doing more on the human rights front, ignoring the black-masked Greek chorus chanticleering behind him in unison, "Irony! Hubris! Those who tempt the gods must die!" He topped that act with a greenhouse gas emissions conference which promoted the benefits of "clean coal burning" and no penalties for missing emissions targets. Actually, there were no targets. Diplomats and emissaries sent to attend from the world's 16 largest national economies had things like this to say: "This is effin' surreal, man. Later, insane-dudes."

The critters in the House of Reps failed to gain veto override numbers for extending SCHIPS, the state children's health insurance program. Bush will veto the bill, so about 5 million children must rely on the kindness of publicly-traded, profit-driven strangers for treatment. Charles Dickens is back in fashion. Remind me to pick up a copy of Oliver Twist. I'm sure each uninsured American child, particularly those under the age of 3, will be inspired to act with a heightened sense of personal responsibility, so as to avoid the illnesses and injuries which traditionally account for infant mortalities.

Then, the Senate passed an amendment calling for the "soft partition" of Iraq by a vote of 75-23. Soft partition? Like in Bosnia? Except for the hundreds of thousands of bodies lying in mass graves, that went very well. Nice to know 23 members of the Senate are still treating Iraq as if it had a self-determined government.

Next, Senators Lieberman and Kyl drafted an amendment to "Combat and Contain" Iran, which classifies the country's Islamic Revolutionary Guard (basically, its army) as a terrorist organization. Though it is a "Sense of the Senate" resolution and not a law per se, Senator Jim Webb (D-VA) referred to it as "Cheney's fondest pipe dream." In other words, it's bad. Build-a-bomb-shelter and stock-it-with-food bad.

Why? Well, it's true that armies are supposed to be annoying at the very least, and often strive to be downright terrifying, but designating a major part of Iran's armed forces as terrorists also makes them technically subject to the 2002 Iraq War Powers Act. In other words, the Senate just voted 76-22 (with McCain and Obama courageously abstaining) to give the White House the authority to attack Iran. Here's the relevant wording of the foul document:

(3) that it should be the policy of the United States to combat, contain, and [stop] the violent activities and destabilizing influence inside Iraq of the Government of the Islamic Republic of Iran, its foreign facilitators such as Lebanese Hezbollah, and its indigenous Iraqi proxies;

(4) to support the prudent and calibrated use of all instruments of United States national power in Iraq, including diplomatic, economic, intelligence, and military instruments, in support of the policy described in paragraph (3) with respect to the Government of the Islamic Republic of Iran and its proxies.

The thought of a nuclear-armed Iran doesn't send me to my Happy Place. And it's not #1 on my list of places to retire to, being behind China and Colombia. But, oh, that's right--Iran doesn't have nuclear weapons. Even if it did, and it attacked another country for the first time in 400 years, the strike area of its longest-range Shahab-3 missile is drawn in the map above. As of right now, Iran poses far less of a threat to America than Pakistan. To some American companies and to their investors, yes, it does pose a threat, in particular by wanting very little to do with them.

The edifices are clean in the District of Columbia, the architecture is classical, and the suits are expensive. But dear God, the stench--it's whoo-hoo! Getting overwhelming.
Posted by MarcLord at 3:57 PM

Yeah, well, see, we gotta go back to some medieval serfdom sort of state, and then rebel and ... good fricking grief. let's just overthrow the fuckers now. Pitchforks and axe handles, baby, just like the peasant mobs of yore...

Good one Marc, good one!

Now on yoru happy note, I shall get on with contributing to the capitalist society :)

by the way, sometimes I find it interesting how certain news do nto make it to the headlines: like Turkey, in spite of American pressure, keeping its 3.2 bln$ commitment to gas pipe with Iran, or the Pakistan/Iran peace pipe deal going through, or Iran's $ share oil trade dropping to only 15% and thinsg like that.

For a consumer society, and an empire built on oil, shouldn't these things be more interesting than Lee Bullyinger?

Like your spelling of Bullyinger. You are an excellent speller, by the way. How did you learn to deal with the inconsistencies of English?

The Turkey/Iran/pipelines stories are readily available. You just have to keep your mind switched on for an hour a day or so, live in Canada, and largely ignore the TV. ;-)

I’m not that much of a internet reader to be honest but
your blogs really nice, keep it up! I'll go ahead and bookmark your site to come back down the road. Many thanks