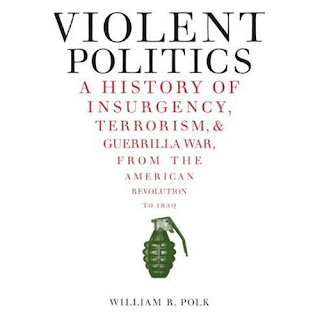 Current Reading: Violent Politics
Heard a bit of an interview with William R. Polk on National Public Radio one past weekend, in which he outlined a method for analyzing insurgencies which made a lot of sense. Basically, he says that 95% of the effective insurgent's job is political and social, and is only 5% military action. I was not familiar with Polk in the least, and having learned more about him now, feel somewhat slighted. It would've been good to know about him earlier.

Polk established the Center for Middle Eastern Studies at the University of Chicago in the 1960s, served as a foreign policy advisor under various presidencies, and has been an outspoken expert against the occupation of Iraq. He has also written a number of interesting books, including the one above titled "Violent Politics," which he discussed on NPR while I helped burn some more fossil fuels.

The chief worries of the most successful insurgents focus on getting food for the families and groups in their areas of operation. Alongside inciting ill will towards a foreign occupier via information campaigns, they would also pick up the garbage, assist with neighborhood watches and procure medical supplies. They would then carefully build a new command structure if one already in place couldn't be adapted to the task at hand. With these relationships in place, they can rely on the overt or tacit cooperation of the populace, and once that is secured, the insurgents have probably won.

Polk does a comparative study of insurgencies which developed into guerilla wars which include a nice sampling of conflicts. The American Revolution, the centuries-long troubles with the English in Ireland, the French in Algeria and Spain, and the United States in Afghanistan and Iraq. He uses all these examples to illustrate the proof of his summary conclusion--the injury and enmity which give rise to determined, violent, self-organizing disorder are not borne of social distance, unshared values, skin colors, religions, or opinions. Though these can serve to exacerbate or escalate timing and nature of conflict.

Polk makes the case that occupations and insurgencies suffer from a simple, shared problem: people hate being ruled by foreigners, and seek self-determination. Some would say the United States is currently ruled by foreign, multinational entities which have been legally recognized as being immortal, and whose duty is to seek infinite profit. Some say it won't be long before these foreign rulers and their advocates openly strike at Social Security, as they've been doing with pension obligations.
Posted by MarcLord at 10:05 AM

Utterly true, that ending statement; they've already been striking at Social Security via Bush&Cheney's administration.
Makes me wonder what the fuck these criminal looters envision: Serfdom for all but the pillaging class?

I am truly curious now, as to Polk's writings, and in particular, the segment that may have been left out in the NPR interview. AKA, what were the stratagems of the occupations that worked out well, or at least neutrally?

Just an intellectual exercise; I have no particular fondness for occupations.

glad to be passing by here, on my way to amazon!

The amount of my mom's SS check is up-graded by miniscule cost-of-living increases which are about 25-33% of the actual inflation rate. Recently the student loan arm of the government suddenly started mistakenly garnishing it for a debt which had been forgiven almost 20 years ago. Nice! There are cap hill rumors SS is going to be slashed under Hillary. Her proposed medical plan is a boon to corporations, a shackle for citizens.

Polk's point is that it's very hard for a foreign occupier to achieve a neutral or good effect because the bias against foreigners is so strong and comparatively easy to exploit. He argues that the very presence of US troops in Iraq hampers the occupation effort. Whereas blatantly puppet governments have often been successful.

The few examples he cited of successful COIN were of unbridled brutality or use of concentration camps and reservations. He didn't talk about the success of measures against native Americans.

It's a really, really good book. Another very good book about the history of insurgency is 'The Transformation of War,' oddly enough written by someone who teaches at the Israel War College.