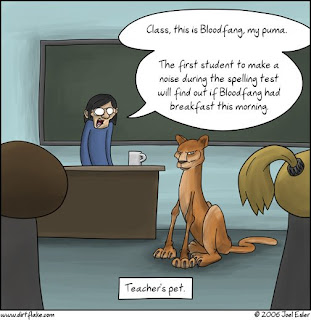 The Future Of Public Schools
Having a youngster has made us start thinking about schools. Personally, I had hoped the problem would just go away, but our son is almost three and a half, keeps growing boisterously closer to school age, has not yet taught himself to read and shows little interest in mastering multiplication or division. Relatives just informed us last night that he seems to have a bright future as a boxer or a bouncer, so we know there's always that to fall back on. Ideally, however, we'd like him to have more options, and so have started checking out schools.

Our city has tended to take top marks for being the most well-read in America. Even though we've known full well that Republikaans do not believe a free, high-quality education should be a government deliverable and have sought to de-fund them in various ways while channeling money to religious, voucher, and "charter" schools, and we heard that school teachers in Detroit went on strike a couple of years back to get for the paper towels, toilet paper, and pencils they were buying out of their own paychecks, but it was still a surprise to look up our city's public high school graduation rate:

That's not counting all the kids who didn't make it to high school, who graduated but can't write well enough to explain something, who don't have the math foundation to make it in engineering, and who never learned items of common cultural significance, such as where Italians come from.

Fortunately, there are ways to be sure our child starts off to getting a good education. First, there's a lottery we can enter. I'm not kidding. If our name is drawn, our son can go to the special Japanese/Spanish immersion program where the higher-paid, more impassioned teachers are. (No choice on which language you get, though.) Next, there's paying $20,000+ in combined tuition and property taxes, the latter of which are largely said to be earmarked for the upkeep of public schools, in order to obtain the quality of education we and our parents received as children for free.

(Graphic courtesy of Cat In The Bag.)
Posted by MarcLord at 5:56 PM

Don't be so negative on Charter schools. Yes they can be abused by fundies and free-wheeling opportunistics corporate types. Nevertheless, they do create a great opportunity for meaningful parental involvement.

Yes, when I lived in Seattle, I voted against charter schools. But now in LA, if I had to rely on regular public schools, my children would have to go to school with a full dose of Ritalin and Zoloft...unless they got into a "magnet" school. Yes, you generally apply in kindergarten, because there are so many 5 year olds who have already tested off the charts in terms of special/brilliant performance skills (they can perform the insane pieces of Hamlet and are toilet trained). So public schools are for the parents who can negotiate getting into a preferential magnet school or the schools that focus on preparing your children to sheepishly accept bureacracy and complacency in servicing the privilged overlords.

If you wonder why people don't give a shit about Bush/Cheney/ healthcare/democracy/thinking for themselves/etc., just look to see how they were trained. Look at the asphalt playgrounds and the Guantanamo-type fences (some with concertina wiring). What have we killed in their souls? There is no nature, no freedom. The primary lessons are fear, behavior indoctrination, and social ordering.

There was a study last year that showed most second-graders in California are burned out. My daughter's "local" school was privileged because it had received an "art grant." The benefit? 20 minutes of art instruction per week. (Let's see, 5 minutes passing out materials, 5 minutes for clean up, 5 minutes helping the kids open bottles of paste, 3 minutes of behavior modification...). And people actually wonder why the US television, music, and movie industry has a disproportionate number of Canadians in high profile rolls?

Charter schools are a forced option now, that's my problem with them. Yes, I'd rather our kids go to them vs. most public schools! I'm just saying charter schools were a step along an intentional continuum to turning our public schools into a dumpster.

It's a tough choice if you want to stay in the city. We're not real aggressive people, and the idea of having to participate in the constant finagling and subterfuge to negotiate the shifting sands of "magnet" this and "gifted" that that is required to be in the public school system dismayed us.

Catholic school tuition was relatively cheap, but I couldn't place my kid in an environment that I myself would have shunned just to save money, so we did the secular private school thing and started writing checks.

You're right, it was a lot like my suburban public school in Ohio. And sometimes they were so precious it made my teeth ache.

Wish the kid had gotten more out of it.